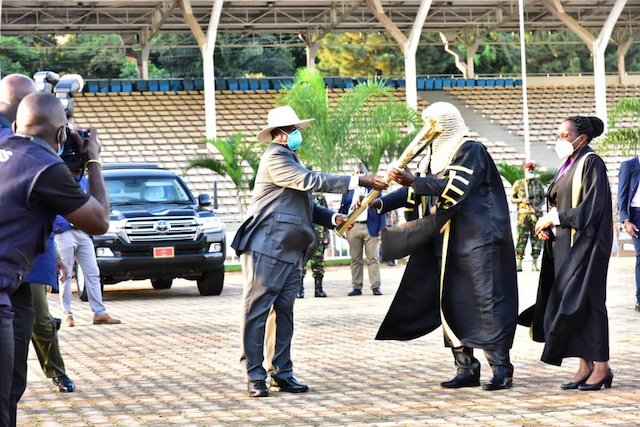 Members of Ugandan parliament have elected Jacob Oulanyah as the new speaker, while Anita Among was elected deputy speaker for a five-year term of office.

Chief Justice Alfonse Chigamoy Owiny-Dollo, who presided over the election of the speaker of the 11th parliament, declared Oulanyah the winner after he garnered 310 votes.

Kadaga, the former speaker of the 10th and 9th parliament ran as an independent candidate after losing the ruling National Resistance Movement (NRM) party endorsement to Oulanyah on Sunday.

Oulanyah was sworn in by President Yoweri Museveni.

“This particular election has been challenging. As a result, expectations are high, fears and uncertainties exist but together we should build friendship, mend the bridges and work together,” said Oulanyah after assuming office.

“We should agree that no view shall be suppressed and work with tolerance. We should act in a harmonious way. We have collective responsibility. I promise to provide leadership through this and walk the talk,” he said.

Oulanyah who presided over the election of the deputy speaker declared Anita Among of the ruling party as the winner with 415 votes.

A total of seven votes were invalid.

The elections at the first sitting of the parliamentary session of the 11th Parliament were held at the Kololo Independence Ceremonial Grounds in the capital Kampala.

The newly elected members of parliament were sworn in into office last week as they began a new five-year term of office after the Jan. 14 general elections.