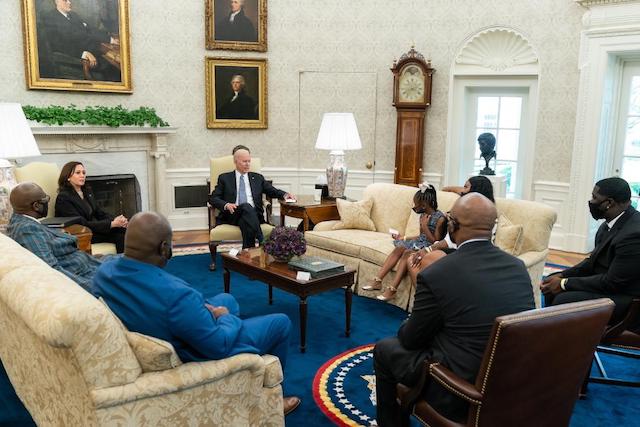 U.S. President Joe Biden said on Tuesday he is hopeful an agreement will be reached on the George Floyd police reform legislation after the May 31 Memorial Day holiday.

Biden had missed a self-imposed deadline of passing the bill by Tuesday, the one-year anniversary of the killing of Floyd by a Minneapolis police officer.

The U.S. leader made the promise a little while after meeting the family of Floyd at the White House.

On his way to his home state of Delaware, Biden told reporters he had spoken to negotiators on the bill and said he was “hopeful that sometime after Memorial Day we’ll have an agreement.”

Floyd’s relatives met on Tuesday with President Joe Biden at the White House and with lawmakers on Capitol Hill to urge passage of police reform legislation in their loved one’s name.

Floyd, a 46-year-old Black man who died in handcuffs with his neck pinned to a Minneapolis street under a white police officer’s knee, become the face of a national movement against police brutality and bias in the U.S. criminal justice system.

His dying words, “I can’t breathe,” have echoed as a slogan in street demonstrations that convulsed the United States and the world last summer in the midst of the coronavirus epidemic.

But Monday’s private Oval Office visit marked the first time any of Floyd’s family had been hosted at the White House, occupied since January by a Democratic administration.

Floyd’s relatives used their pilgrimage to Washington on the anniversary of his death to lobby Biden and Congress for the enactment of legislation ensuring the just treatment of minorities by law enforcement.

In March, the Democratic-majority House of Representatives passed a bill, dubbed the George Floyd Justice in Policing Act, to ban contentious police tactics such as “choke holds,” while making it easier to sue individual police officers for unlawful conduct. read more

A bipartisan group of lawmakers has been working to hammer out a compromise to win enough Republican support to ensure passage in the Senate, where Democrats hold a razor-thin margin of control.

He described Biden as supportive, calling him “a genuine guy.”

“He did let us know that he supports passing the bill, but he wants to make sure that is the right bill and not a rushed bill,” said Floyd’s nephew Brandon Williams.