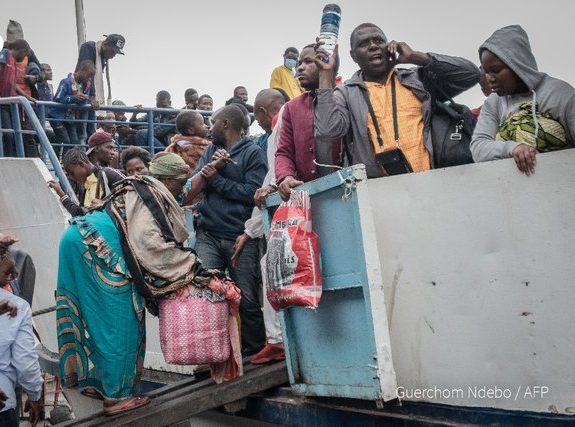 Congo DR authorities have ordered people to evacuate parts of the city of Goma, as Mount Nyiragongo volcano threatens to erupt again.

The order given on Thursday night sparked a second round of exodus of tens of thousands of people.

“Current data on seismicity and the deformation of the ground indicate the presence of magma under the urban area of Goma, with an extension under Lake Kivu,” the local military governor General Constant Ndima said in a broadcast.

“Right now we can’t rule out an eruption on land or under the lake, which could happen very soon and without warning,” he added.

“The situation can change rapidly, and is being constantly monitored.”

Ndima said there were also supplementary risks associated with the interaction between magma and water in Lake Kivu.

There were several potential problems linked to this, he explained, among them the “destabilisation of the volume of gas dissolved in Lake Kivu and the emission of potentially dangerous gases at the surface”.

He said evacuation is necessary and should be done calmly and without rushing.

Authorities have arranged transport towards Sake, around 20 kilometres (12 miles) west of Goma, in each of the ten districts of the city affected, Ndima said.

“People should take the bare minimum with them, to make sure everyone has a chance to get on,” he added.

The announcement was followed by the immediate departure of tens of thousands of people towards the southwest, in the direction of the Rwandan border, the AFP reported.

The United Nations said 32 people died and at least 5,000 are feared to be homeless after the first volcanic eruption on Saturday.

The UN humanitarian affairs office OCHA said 24 of the victims were burned alive by lava, adding that 40 adults have been reported missing.

By the time the eruption ended on Sunday the volcano had spewed out two rivers of molten rock, one of which came to halt on the edge of Goma after obliterating villages in its wake.

Goma, a lakeshore city of 1.5 million people, lies around a dozen kilometres (eight miles) from the volcano.

Local volcanologists have recorded hundreds of aftershocks since Nyiragongo roared back into life, including 119 on Monday alone.