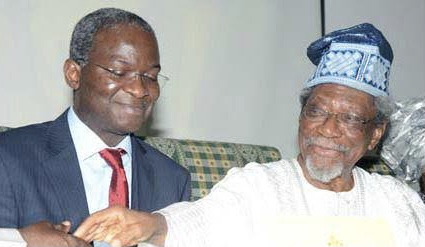 Minister of Works and Housing, Mr. Babatunde Fashola, has commended former Federal Commissioner for Works, Alhaji Femi Okunnu, for kick-starting the great journey of building the nation, by inaugurating the first Architects Registration Council of Nigeria (ARCON) in 1969.

Fashola gave the commendation on Thursday while performing the groundbreaking and foundation laying ceremony of the proposed ARCON House in Abuja.

The minister saluted the former Federal Commissioner for Works, who happens to be his Uncle, for his foresight, describing as ironic the fact that he is today continuing the journey of nation-building as a distant successor.

“It is indeed very ironic that I happen to be here today to now continue the journey he started. Really, it is interesting how these things happen and ironically none of us is an architect, but very happily we are both lawyers”, the Minister said expressing joy that the challenge is that of building and not of disagreement.

Fashola called for synergy and cooperation among all Nigerians, especially professionals and other stakeholders, to join hands to rebuild the nation.

He said in spite of the challenges and disagreements among the various stakeholders and interest groups, Nigerians could work together to build a nation of peace and harmony.

He noted that despite being enmeshed in challenges of disagreement a few years ago, ARCON had decided to set aside those challenges and build for itself a befitting House.

The Minister commended the current ARCON leadership noting that three years ago, when it was inaugurated, the Architecture profession had very many challenges which he described as largely man-made.

“I am happy that Engr. Ajayi (President of ARCON) and his team have taken upon themselves to say that if these problems are man-made, it will only take men of goodwill to resolve them and this is a very good example of the microcosm of what ARCON has done as a blessing to all of us,” he said.

He commended ARCON for the decision to build and establish its presence in the Federal Capital Territory as a symbol of the unity of its professionals.

“This is a much better place for the Architecture Family than where it was three years ago,” he added.

In his goodwill message earlier, the Governor of Taraba State, Arch. Darius Dickson Isiaku, congratulated ARCON for finally deciding to build for itself, describing as a paradox the fact that the Council has for decades built edifices for others without having a roof over its own head.

Commending the efforts of the Minister of Works and Housing and his FCT counterpart to bring the ARCON decision to reality, the Governor, who was represented at the occasion by one of the State officials, Arc. Dauda, also commended the efforts of the Council to make the project possible at this time.

In his goodwill message, the Minister of Industries, Trade and Investment, Otunba Adeniyi Adebayo, who was also represented at the occasion, congratulated ARCON on its efforts to establish its presence in Abuja noting that by its mandate his Ministry considers ARCON a veritable stakeholder in the development of the nation.

Others who gave goodwill messages included a past President of ARCON and former Governor of Akwa Ibom State, Arc. Obong Victor Attah, who thanked Fashola for brokering lasting peace within the profession urging him to ensure that Nigeria is being built by Nigerian Architects and where a foreigner is concerned, such foreigner should be registered in Nigeria.

ARCON President, Arch (Sir) Gabriel Oladipupo Ajayi listed the cardinal objectives of ARCON to include re-engineering the Council, harmonizing positions with all interest groups with the help of the Minister of Works and Housing, who, according to him, “calls us together all the time” and building a befitting home for Architects as well as maintaining a visible presence in Lagos.

Expressing gratitude to the Minister for his peace efforts that have brought the profession and interest groups together, the ARCON President declared, “On his part, he has been a backbone of this Council”, adding that as a result the Council has delivered on all fronts.