Lagos flags off registration of pupils into public primary schools 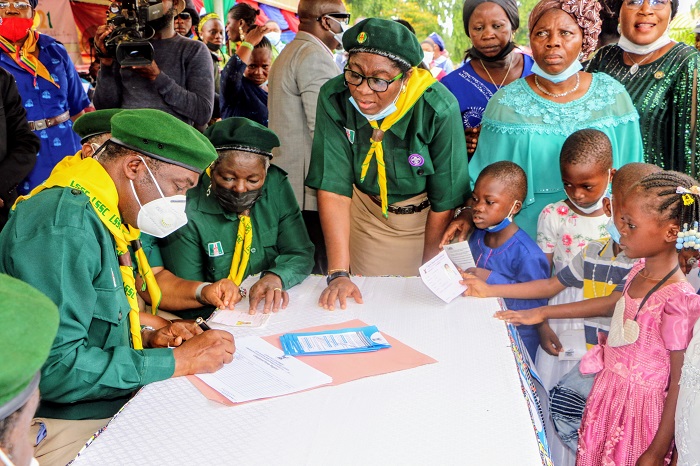 Lagos State Government today at the Police College, Ikeja; flagged off the registration of pupils into its public Nursery and Primary Schools just as the administration announced its plans to continue to invest in the holistic education of all children in the State.

Speaking at the Year 2021 Children’s Day Celebration, Governor Babajide Olusola Sanwo-Olu represented by his Deputy, Dr. Kadri Obafemi Hamzat said, his administration would also continue to ensure that the educational programmes it has introduced to develop and boost human capital are sustained, stressing that all these will be achieved through the provision of an enabling environment for quality teaching and learning in the state.

The Governor further stated that as part of efforts by the state government to ensure that children have access to quality education, the state government had commissioned and handed over 1,097 school infrastructure projects across the 57 Local Governments and Local Council Development Areas of the state.

According to the Governor, “This infrastructure improvement exercise is an ongoing process that will continue until all public schools in the state are covered.”

He, therefore, charged the students to be more devoted to their studies as this will inspire the government to further fulfil its responsibility of raising young individuals to become quality leaders that will make the State and Nation greater in the nearest future.

He declared, “Our dear Children, as we celebrate today, let me remind you that sound education still remains a trusted means of attaining greatness: it prepares you for life’s challenges and equip you with the necessary skills for self-sufficiency. You cannot afford to toy with your future.

“I, therefore, urge you to endeavour to make your parents and Lagos State proud by being devoted to your studies. This will inspire us as a responsive government to further fulfil our responsibility of raising young individuals to become quality leaders that will give us that greater future as a State and Nation.”

He charged them as promising future leaders to have the right attitude and be academically inclined in order to succeed, adding that they should also shun mediocrity in all they do and strive to reflect on nothing but excellence in learning and character.

Noting that the world is now a global village and increasingly more competitive, he urged the children to embrace modern technologies so as to succeed as there are different educational applications on mobile phones that will enhance their creativity and critical thinking.

He said, “Since technology has been incorporated into the school curriculum, do all you can to acquaint yourself with the latest in the e-learning (digital) library as it relates to the various subjects being offered in your schools. This will put you in a vantage position to compete favourably with your peers across the globe.”

Commenting on the celebration, the Governor noted that it gives both the government, parents, guardians and caregivers the opportunity to reflect on the state of the welfare of children and what needs to be done to make the society better, safer and more inclusive for them.

He, therefore, urged parents and guardians to be alive to their responsibilities towards the upbringing of their children, particularly guiding them against all forms of social vices like cultism that is now capable to landing both parents and their children caught in such act in serious problem in the State.

Earlier in her welcome address, the Commissioner for Education, Mrs. Folashade Awofisayo thanked the State Governor, Mr. Babajide Olusola Sanwo-Olu for his passion and investment in the education sector and providing a level playing ground for all children in the State to nurture and grow their knowledge in pursuit of a better tomorrow.

She commended the teachers for mentoring the children and their commitment, diligence and dedication.

While stating that the government is working tirelessly to provide all they need to meet their true potentials, the Commissioner charged the students to continue to work harder and excel both in academic and co-curricular activities, as the government has put a lot of facilities at their disposal and they have to effectively use them to their advantage.