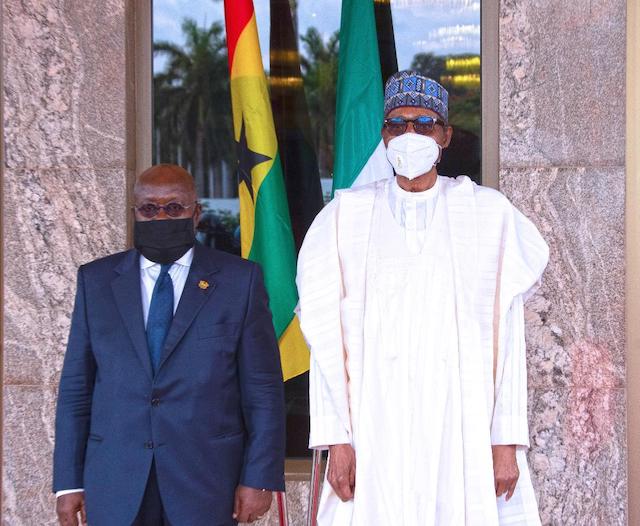 The agenda of the meeting was not disclosed to State House correspondents as at the time of filing this report.

Akufo-Addo, who is the Chairman of the Authority of Heads of State and Government of the Economic Community of West African States (ECOWAS) was speculated to have come to discuss issues concerning the sub-region with the Nigerian leader.

The Ghanaian leader also used the opportunity of the visit to condole with the government and people of Nigeria over last Friday’s plane crash, which killed Nigeria’s Chief of Army Staff, Lt. Gen. Ibrahim Attahiru and ten other military officers in Kaduna, Kaduna State.

Akufo-Addo had earlier today attended the 2021 ECOWAS Parliament first Extraordinary Session at ECOWAS headquarters, Abuja, where he called on West African leaders to consolidate efforts to root out terrorism from the region.

He noted that in spite of the best efforts in dealing with the menace by the ECOWAS leaders, there were persistent attempts to distabilise several countries of the ECOWAS community.

He said these include attacks on state symbols, civilian populations and military bases.

According to Akufo-Addo, this has been the case recently in Niger, Mali, Cote d’Ivoire, Burkina Faso and Nigeria