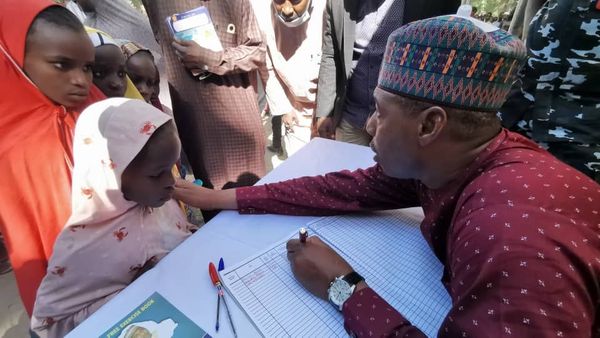 1,163 IDP-children enrolled in school on Zulum’s 3rd day in Damasak

Governor Babagana Zulum of Borno has announced that the bill to domesticate the Child Rights Act is almost ready for his assent to become law in Borno.

He made this known during an interaction with Ms Ulla Mueller, the Country Representative of the UN Population Fund (UNFPA) and Woo Chan Chang, the Country Director of the Korea International Cooperation Agency (KOICA), who paid him a courtesy visit to Maiduguri on Wednesday.

The governor said “the Child Rights bill is almost ready for my assent, and we are working on the Violence Against Persons Prohibition (VAPP) Act.

“We have some grey areas, but we are able to conclude all necessary arrangements to ensure speedy passage of the VAPP Act.

“I had a discussion with the state attorney-general and commissioner for justice on the issue yesterday,” Zulum said.

Zulum also said that the state government was doing everything possible to provide access to justice to survivors of Gender-Based Violence (GBV).

He explained that the commissioner for justice was already up and doing to ensure justice for GBV survivors.

Earlier, the UNFPA country representative had urged the governor to prioritise the passage of the VAPP Act.

She said, “this important piece of legislature will help to protect the rights of women, who are predominantly affected as shown by current data and also bring perpetrators to justice.”