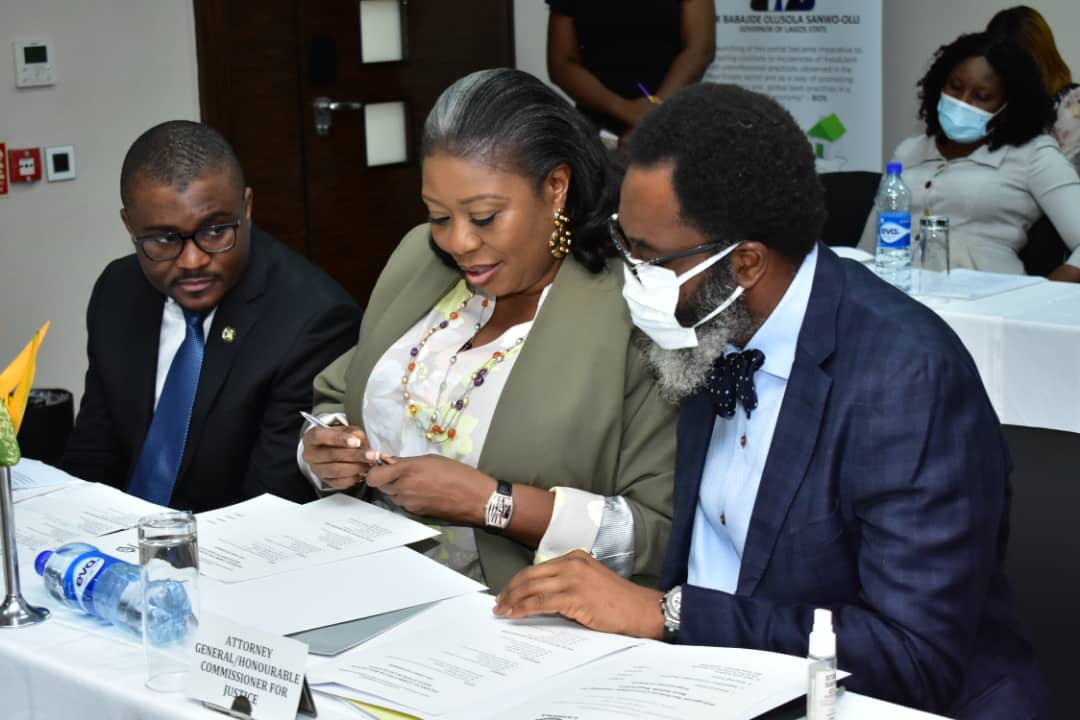 A 16-man Technical Committee on Real Estate Regulation that would help facilitate the restoration of investors’ and public confidence in the Lagos State Real estate sector was on Thursday inaugurated by the Lagos State Government.

The committee members which had earlier been approved by Governor Babajide Sanwo-Olu, comprise of three Commissioners, Special Adviser to the Governor on Housing, Mrs. Toke Benson-Awoyinka, insurance experts, banking professionals, legal luminaries, captains of industries among others.

Speaking during the inaugural meeting of members of the committee, the brainchild of the Lagos Real Estate Regulatory Authority (LASRERA), Benson-Awoyinka explained that the Committee’s mandate is to design a policy and fiscal framework to institute and promote global best practices in the State.

She said that one of the lessons from the outbreak of covid 19 in the State, last year, was the need to create and develop robust housing policy with stakeholder involvement and engagement, curtail the malpractice in the real estate sector while also improving financial transparency and fiscal responsibility.

The Special Adviser added that the constitution of the committee members was in line with the Executive’s agenda of transforming Lagos State into a 21st century model of effective and efficient governance, stressing that the Committee has been given the mandate of addressing the challenges in the sector with particular attention to reforming the Home Ownership Model to increase housing stock and reduce deficit.

“To achieve this, the Committee will be required to tackle the set up of a comprehensive system and framework which will prioritise the development of a fiscal responsibility and transparency model to promote the inflow of local and international funding required to confront the housing deficit, among others.

“The Committee will set up a governance structure which will oversee the entire real estate framework and stakeholder engagement in the state to minimize trust deficiency. The structure will cater to the entire system of the real estate process and will incorporate participation from Private Developers, Financial Institutions and of course the State Government in a Public-Private Partnership model”, Benson-Awoyinka reiterated.

She informed that in order to further boost confidence and safeguard investment in the State, the Committee will be responsible for the centralization of insurance management for all real estate assets which will dovetail into the existing Lagos State Risk Management framework.

In his remarks at the event, the Commissioner for Finance in Lagos State, Dr. Rabiu Olowo, who is also a member of the committee from government side, said that beyond building roads and bridges across the State, the promotion of policy formulation for ease of doing business is also important in addressing the challenges confronting the State.

He maintained that the Real Estate sector has not done optimally well considering the huge potentials in the sector and its contribution to the nation’s Gross Domestic Products, GDP.

In his words, “The Real Estate Sector in Nigeria is yet to grow to the level of making impact on the growth of National GDP. The reason is not far fetched, it is because the secrets of the sector is yet to be explored by both the investors and the government to help harness the potentials to the benefits of the Nation.

“In modern cities like Dubai, where real estate accounts for c.20% of its GDP (compared to an average of 7% in most other countries). This statistic calls for a revisit of our real estate model and possible re-appraise our assumptions in other to improve our contribution to the Nigerian economy. ”

Olowo also implored all stakeholder in the sector to work closely as a team in transforming the Real Estate Sector particularly in Lagos State in achieving one of the best real estate sectors across the globe.

Also speaking, the Attorney-General and Commissioner for Justice, Moyosore Onigbanjo, urged the committee members to see the task ahead of them as efforts towards revamping the entire real estate practice in the country through Lagos State.

He pledged that with partnership of key stakeholders and industry players in the real estate sector, members of the committee will be able to provide the right regulatory framework for real estate transaction to thrive and give confidence to investors in Lagos State.

The Attorney-General also stated that the State Government will ensure that necessary sections of the establishing law for LASRERA is amended to accommodate more provisions that enhance the vision of LASRERA as intended by the State Government and also assist the committee members.

Also in the committee are; Mr. Femi Adewole of the FHF, Mr. Owolabi Salami of AllOaks Insurance Limited, Mr. Demola Sogunle of Stanbic IBTC, Mr. Deji Charles Adeogun of Philips, Charles, Anthony LLP and of course myself Hon. Toke Benson-Awoyinka the SA to the Governor on Housing.