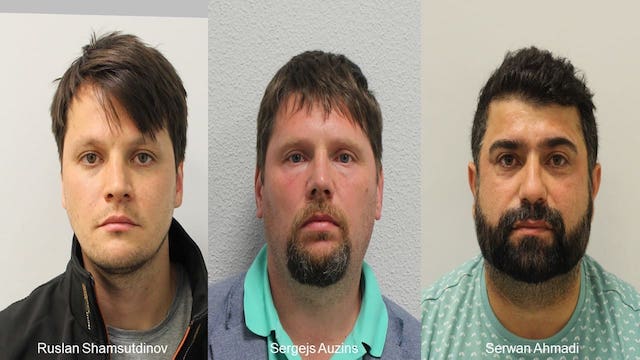 Officers from the London Metropolitan Police Specialist Crime Command seized over £5 million from a gang following a protracted operation.

Three men were sentenced on Friday, 28 May at Harrow Crown Court after pleading guilty last year to conspiracy to conceal, convert and transfer criminal property.

Serwan Ahmadi, 35, of Pycroft Way, Edmonton was sentenced to one year and eight months’ imprisonment, suspended for two years.

He was also ordered to undertake 150 hours of unpaid work.

Detective Superintendent Jason Prins, from the Specialist Crime Command, said: “As part of a long running operation against gun crime and large scale Class A drugs supply across London, over five million pounds in criminal cash was seized from an address in Fulham.

“Organised crime is motivated by money and is one of the biggest causes of violence on our streets. Tackling this violence is our main priority.

“This seizure, and the conviction of these men for laundering that money, will have a major impact on the ability of a number of crime groups to carry on with their activities.”

During the operation, Sergejs Auzins, a large scale money launderer, was identified.

Officers established he was taking large quantities of cash to an address in Fulham.

He was noticeably struggling to carry heavy bags. He placed the bags into a nearby parked car.

Officers stopped him and the bags were found to contain a considerable amount of cash.

A search of the apartment uncovered further cash and a well organised money laundering system.

On Sunday, 14 July, Serwan Ahmadi was seen to hand a bag to another man who was arrested at the scene by officers.

The case against this man was discontinued.

Later that day, Ahmadi was seen leaving his homes address in Edmonton with another bag. He was stopped and arrested by officers in Victoria Road, Edmonton.

The following day, Sergejs Auzins was arrested at his home in Rochester and a further £14, 435.63 was seized.