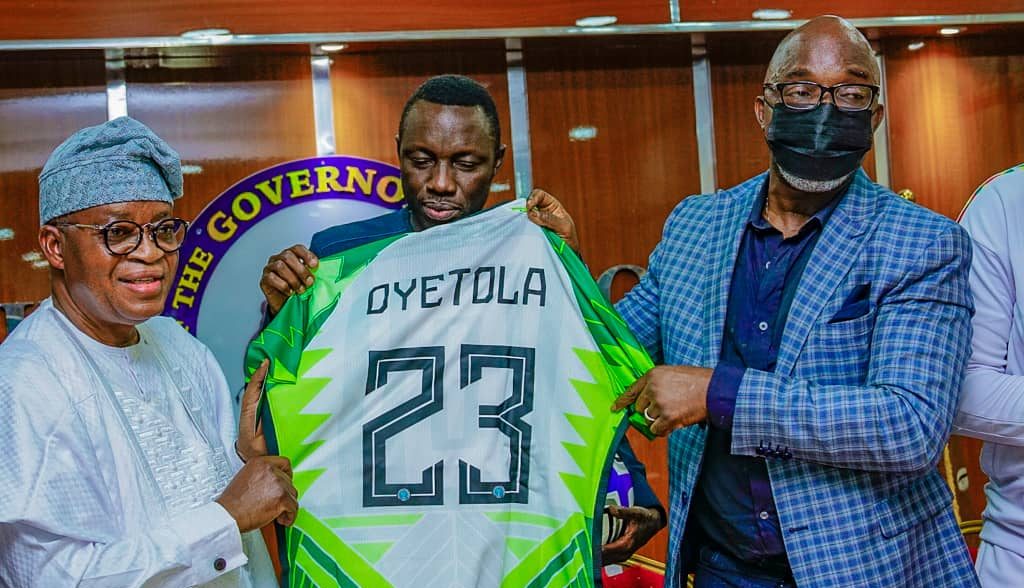 The President of the Nigeria Football Federation (NFF) Amaju Pinnick has applauded the administration of Governor Adegboyega Oyetola for providing an enabling environment for sports and sporting activities to thrive in the State.

Pinnick, who stated this during his courtesy visit to the Governor recently, added that the state was suitable for sports development in view of the peaceful atmosphere reigning in the State as well as the government’s youth-friendly and sports development policies.

The NFF President who attributed the prompt involvement and intervention of the administration in youth engagement as remarkable and worthwhile said it is worthy of note that Osun is endowed with the relevant potential to advance sporting activities.

“No doubt, Osun is the home of security and as a matter of fact, my visit has further validated that, in view of the peaceful atmosphere here and there, Osun is good to advance sporting activities. My trip from Ile-Ife to Osogbo was like one traveling from London to Manchester. It was so peaceful and adventurous.

“I am highly impressed with what I have seen, particularly your commitment to sports development. We are ready to support you in actualising your dreams in this regard.

“I congratulate you for starting the Principal’s Cup. I am humbled by the reception given since I arrived in the state. One thing I observed is the quality of your cabinet members. They are very intelligent. I am proud of you and members of your administration,” he added.

In his remarks, Governor Oyetola said his administration was resolute to advance the course of the youths and by implication, promote youth engagement.

Oyetola who described sports as a veritable tool to promote ‘unity in diversity, said the administration has put in place workable modalities capable of making the sector more attractive, inspiring, and lucrative for the young ones.

The Governor said that the State is set to commence Principal’s and Governor’s Cup as part of efforts to scout for young talents and properly engage the youths productively.

According to him, football and other sporting activities were strong factors that foster bond of unity among the nations and nationalities in the world.

He said no effort would be spared by the Administration to judiciously harness the potential embedded in the sector for the progress and success of the State.

“In Osun, we are making conscious and deliberate efforts to develop sports as our own way of engaging our youths in productive activities. We want to cultivate our youths, positively engage them and channel their energies for positive development.

“I am happy to report that the same private investor is building a Sports Academy in our State, just as we are providing the enabling environment. The Academy will have 5,000 to 6,000 capacity stadium, four training pitches for track and field events with 1, 200 seaters, students classrooms and staff quarters, 18 holes Golf Course and a multi-purpose sporting arena, among other world-class features.

“As part of our efforts to improve football in Osun, we shall be commencing our State League soon, just as we are about to commence Governor’s and Principal’s Cup competitions. The idea is to harvest raw talents with a view to making them world-class stars and consequently improve our IGR.

“Additionally, the State is set to kick-start its Sports Festival. In all of these, we will need your support to help realise our vision, especially in making our stadium one of the FIFA accredited centres in scouting for young talents,” he added.

While commending the NFF President on his commitment to transforming the sector, Oyetola said, “We are indeed proud of your feat. I have no doubt you will do Nigeria proud

Earlier in his remarks, the CEO/Managing Director, Peculiar Ultimate Concerns Limited, Engr. Olanrewaju Adeleke, reiterated his company’s commitment to partnering the State in the area of infrastructure development.

He said his construction company in collaboration with the State Government is resolute to complete the ongoing Sports Academy situated at Ile-Ogbo in Ayedire Local Government Area of the State as part of efforts to scale up sporting activities in the State and place Osun in its rightful position in the world sports map.

Also in his remarks, the Commissioner for Youth and Sports, Hon. Yemi Lawal, said the administration has done a lot to turn around the fortune of the State in the sports sector.

Lawal, who emphasised the administration’s resolve to promoting youth engagement, said the State had successfully sustained its policy to actualise the same through sports development.