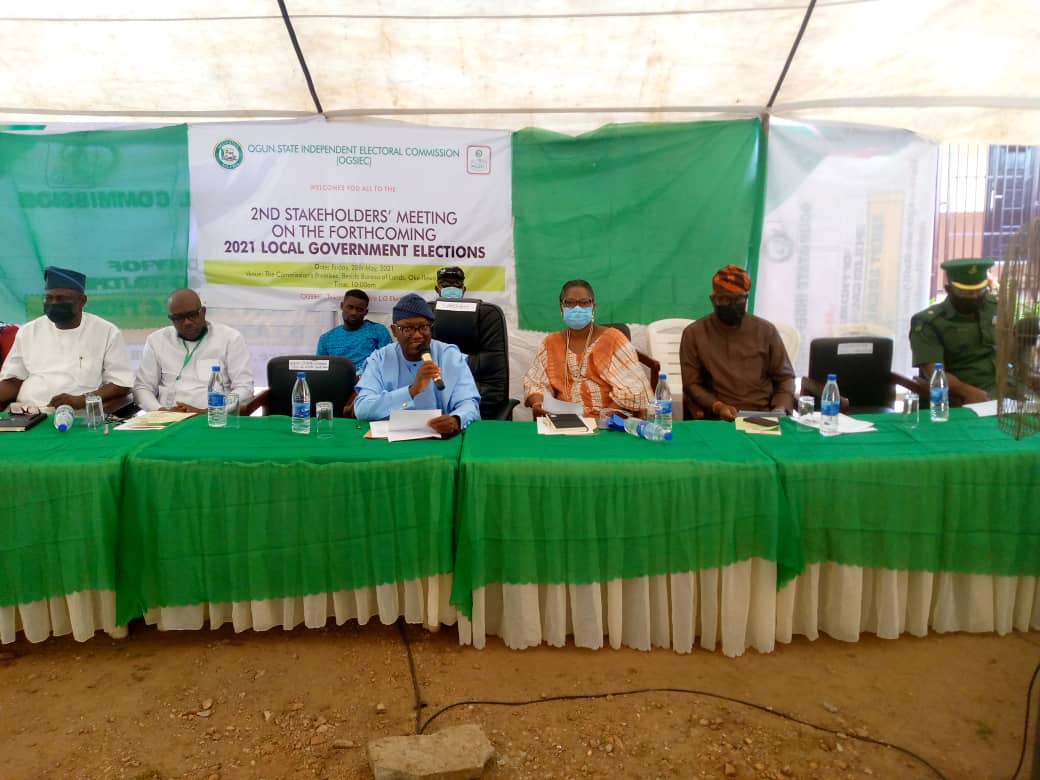 OGSIEC during the stakeholders’ meeting, also restated a strong resolve to abide by the tenets of democracy and uphold electoral values in the coming polls.

Speaking at the event, Chairman of the Commission, Mr. Babatunde Osibodu assured that the meeting was necessitated by the dogged commitment of the Commission at delivering a credible election, recalling that OGSIEC has implemented suggestions of political parties during its first stakeholders’ meeting, adding that, it was also an avenue for all concerned to express their opinion regarding the forthcoming council polls.

Osibodu while disclosing that the Commission has understudied the Local Government elections of some states, with the view to avoiding loopholes and errors, called on political parties, religious leaders and all stakeholders to play their part accordingly, submitting that for the election to be successful, everyone has roles to play.

“In our drive to ensure that the Commission conducts an election devoid of violence and chaos, we have been to other states to witness how they conducted theirs and consolidate on the knowledge and experiences gathered.

“Let me once again reiterate and assure you all of the Commission’s resolve to be fair, impartial, transparent, even-handed and above all, not soil our consciences.

“It is now very imperative to remind all stakeholders of their responsibilities before, during and after the elections. I want to humbly advise security agencies to maintain and beef up security measures by building the confidence of the electorate to believe that they can safely come out to exercise their civic duties by voting for credible candidates of their choice.

“All security agencies in the State are therefore encouraged to rise to the challenge of the eventuality of violence, threats to the life of personnel and the electorate,” he said.

The OGSIEC boss further charged political parties to thoroughly screen their candidates before forwarding their names to the Commission, as a background check on all aspirants was essential to avoid presenting candidates of dubious character, while urging the electorate to come out en-masse for the exercise, with an assurance that their votes will definitely count.

Delivering a talk on “Road map to Free, Fair and Credible Local Government elections”, representative of the Independent National Electoral Commission (INEC), Mr. Idowu Ayoyinka charged political parties, as well as, the electorate to comply with rules and regulations guiding the conduct of elections, noting that their conduct before, during and after elections should be centred on service to humanity.

He urged OGSIEC to ensure adequate logistics and budgeting were well taken care of, revealing that, ‘for an election to be free, fair and credible, logistical arrangement must be adequately prepared for”.

Earlier in her welcome address, Permanent Secretary, OGSIEC, Mrs. Mojisola Dosunmu maintained that the Commission will be neutral, urging politicians to advise their followers to avoid violence during the exercise.

Highlight of the event was an interactive session where various political parties, religious leaders, Civil Society Groups, Security Agencies among others asked diverse questions, as well as, made suggestions instrumental to achieving credible polls.

Giving the vote of thanks, a Commissioner in the Commission, Mrs. Remilekun Olaopa appreciated political parties and other stakeholders for attending the event, promising the commitment of the Commission at addressing concerns raised.

Other groups who graced the occasion included the National Association of People Living with Disability, National Youth Council of Nigeria, Committee for the Defense of Human Right (CDHR), the Christain Association of Nigeria (CAN) and the Nigeria Supreme Council for Islamic Affairs (NSCIA), among others.