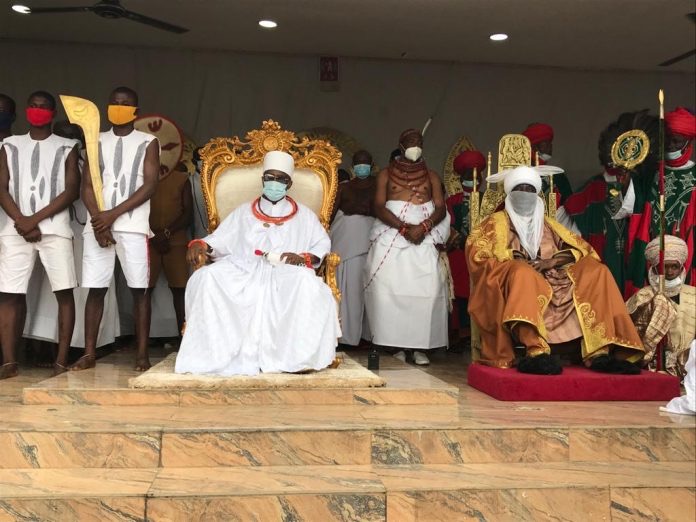 The Emir of Kano, Aminu Ado-Bayero, has called for strengthening the aged-long cultural ties between the Kano Emirate and the Benin Kingdom.

This is even as he sued for peaceful coexistence among people of the two Kingdoms in particular and Nigeria as a nation.

The Monarch stated this on Saturday in Benin, during a courtesy visit to his Benin Kingdom counterpart, Oba Ewuare ll.

He stated that he was in the ancient city of Benin, “to strengthen the peaceful coexistence that has existed between the Kano Emirate and the people of the great Benin kingdom.”

The Emir who disclosed that he has been to the Benin kingdom before and that he would always be glad to visit it again, said being in Benin is like a home-coming for him.

“We have been here before, and coming back here, I am here to extend my respect and my appreciation from Kano Emirate to the Benin kingdom and the rest of the people of Edo State.

“I will always be here for a reason, that is unity, and for the coexistence of this country,” he said.

Ado-Bayero, who described Oba Ewuare ll as his elder brother, prayed for peace and stability of the state and Nigeria at large, and God’s blessing on the Monarch.

“My wish has always been a goodwill to Edo people and for Nigeria at large, and I pray, whatever he puts his hand, he will succeed.

“I pray peace and stability will be paramount here. And I pray, my big brother, the Oba of Benin, and my other brother, the governor, and all the rest of the leaders, I pray that they will succeed in all their endeavours, I pray peace will continue to reign in Nigeria,” he prayed.

Responding, the Benin Monarch said the Emir’s visit to his palace has marked the opening of a new vistas of possibilities and clearly buttressed the age-long traditions of their forefathers.

He said it gladdens his heart that the Emir decided to reciprocate such gesture in continuation of the tradition of respect and conviviality between the Kano Emirate and the Benin Kingdom.