Akpabio in Oporoza to beg his 'brother Tompolo' 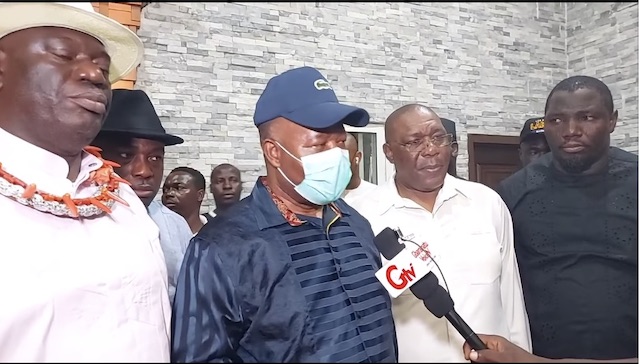 Akpabio, second left, after his peace meeting in Oporoza with Tompolo and traditional rulers

The Buhari administration responded to the one week ultimatum given by ex-Niger Delta warlord, Tompolo, with the Niger Delta minister, Godswill Akpabio jetting to the region to sue for peace.

High Chief Government Ekpemupolo, popularly known as Tompolo’s ultimatum, calling for the constitution of the board of the Niger Delta Development Commission, expires on Sunday.

Government did not respond with a promise to protect oil installations, instead its minister, Godswill Akpabio arrived Delta state, bearing peace olive.

In a video, in which he summarised his mission, Akpabio said he met with traditional rulers in the region, chiefs from Ondo, Delta and Bayelsa, in the palace of the king of Gbaramatu Kingdom, Williams Ogoba.

He capped it with a visit to “my brother Chief Tompolo”.

He said the meeting was fruitful, which may mean that Tompolo will sheath his swords for now.

Akpabio said he clearly understood the message of the stakeholders, that they wanted representation.

Posturing the Buhari government as a listening one, Akpabio said he would fast track things.

Thus, Nigerians should expect the constitution of the NDDC board, sooner than later.

Tompolo had in a signed statement on Sunday threatened that failure to inaugurate the board of the NDDC within seven days would lead to total shutdown of oil facilities in the region.

Akpabio was earlier received at the Osubi airstrip in Warri by Otuaro, and his younger brother, Dennis, as well as some senior military officers.

The minister then moved in a boat to Oporoza, for the meetings with Tompolo and others.