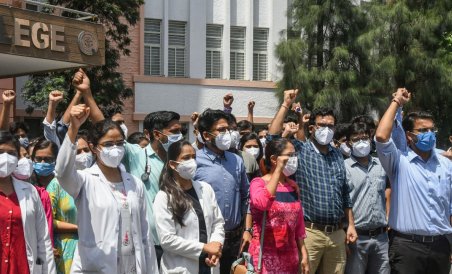 The doctors tendered resignations on Thursday after Madhya Pradesh high court described their protest as “illegal’’ and directed the doctors in the state to resume their duties within 24 hours.

“The government did not accept our demands but only gave us assurance, therefore, we did not end our strike.

The doctors also announced that they will challenge the high court ruling.

The junior doctors, demanded a hike in stipend and free treatment for them and their families if they contract Coronavirus (COVID-19) and started an indefinite strike on Monday.

The court said in case the striking doctors do not resume duties within the set timeframe, the state government must take stern action against them.

The court condemned the junior doctors’ decision to go on a strike at the time of the ongoing pandemic and said such a step cannot be encouraged during a health crisis.