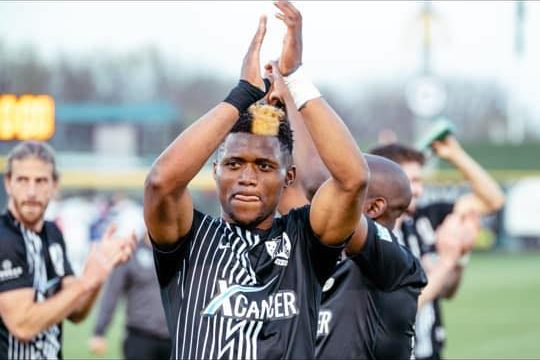 Six Nigerians, one American and two Ghanaians, including a soccer player Abdul Osumanu have been indicted by a federal grand jury sitting in Charleston, West Virginia, for romance scams.

The men were indicted for defrauding at least 200 victims, many of whom are elderly, of at least $2.5 million.

According to a report by Department of Justice, Osumanu’s gang members were identified as follows:

John Nassy, 27, a citizen of Nigeria, residing in a suburb of Washington, D.C.;

Ouluwabamishe Awolesi, also known as Oluwabamise Johnson, 28, a citizen of Nigeria and the United States, residing in Beltsville, Maryland;

Banabas Ganidekam, 24, a citizen of Ghana, residing in Westerville, Ohio; and

Abdul Osumanu, 26, a citizen of Ghana, residing in Omaha, Nebraska.

All nine of the defendants have been apprehended in operations executed by the United States Secret Service and other federal, state and local law enforcement agencies in seven states.

According to the indictments, from 2016 to 2020, the defendants allegedly participated in a series of romance and other online scams designed to coerce vulnerable victims into sending money to various bank accounts controlled by them.

The indictments describe romance scams as online schemes that target individuals looking for romantic partners, friendship, and other close personal and business relationships on dating websites and other social media platforms.

The defendants created profiles using fictitious names, locations, and images which allowed them to cultivate relationships with the victims.

To carry out the schemes alleged in the indictments, victims were often led to believe that the defendants were U.S. residents working abroad.

However, the investigation revealed that these defendants were actually located in the United States. At the early stages of the romance scams, defendants frequently requested relatively small gifts, such as gift cards and cell phones from their victims. As the relationships continued, they requested increasingly larger sums of money from their victims.

The defendants allegedly opened bank accounts and laundered the proceeds of the romance scams through those accounts. The defendants also occasionally used cryptocurrency and celebrity meet-and-greet scams to obtain money from their victims.

He’s due in a West Virginia courtroom next week.

The U.S. Attorney alleges Osumanu sent $43,000 to Ghana. He said he supports 10 family members there.

The government alleges Osumanu scammed an Indiana woman out of more than $19,000 in 2017, saying it started out with him asking for educational payments, then evolved into a fake inheritance tax on $7.5 million in gold bars.

The government also alleges Osumanu had a role with a co-defendant accused of scamming $67,000 from a widow they met on an online dating website