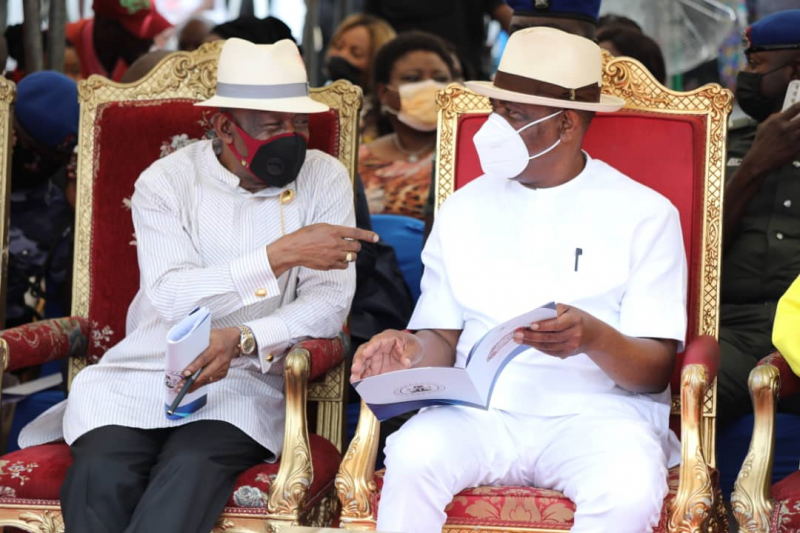 Governor Nyesom Ezenwo Wike said with what his administration has achieved, and is still doing, nobody in the state needs to talk about the All Progressives Congress (APC) anymore.

The governor asserted the flag-off of construction work of the Ogbum-nu-Abali/Eastern-Bypass Road project on Tuesday in Port Harcourt.

Governor Wike explained that the previous administration politicised the reconstruction of the Ogbum-nu-Abali/Eastern-Bypass road and actually failed to accomplish it.

The governor said he has defiled those political intrigues and has genuinely interfaced with the people to understand the economic benefits a dualised road in the city centre could attract.

According to Governor Wike, with the level of infrastructural development around Ogbum-nu-Abali, there will be a spike in the value of the property and enhanced economic activities.

“I know that the people of Ogbum-nu-Abali resisted the dualisation of this road because of lack of information. When I met with the community leaders, they said look, they have houses bequeathed to them by their grandparents.

“I told them that whether they like it or not if I don’t dualise it today,  tomorrow somebody else will do it. And you don’t know who is coming.

“So, it’s better done now that I am a governor than when you don’t know who is coming. And the economic benefit of this road is too much, which you may not understand now.”

Speaking further, Governor stated that the entire Old Government Residential Area (GRA) has been given a facelift with quality road projects.

“This is the only place remaining.  Old GRA cannot be like that and then we will leave this place.  We have done the Rebisi flyover,  the Oru-Abali flyover. There is no way this place will not be dualised at all. It’s not possible.”

“Thank you, governor, for the Ogbum-nu-Abali internal roads, completed, commissioned and profitably in use. Thank you for being a worthy son and governor. Thank you for the exemplary leadership, the infrastructural and human development in all sectors.”

The Rivers State Commissioner for Works, Elloka Tasie-Amadi, while giving the project description said the dualisation of the Ogbum- nu- Abali Road will extend all the way to the ongoing Eastern bypass dualisation.

“Today Ogbum-nu-abali Road is a 7.3m wide single carriageway, with a cross-section of approximately 8.5m width inclusive of the drains on either side of the road. After reconstruction and project completion, we will have a cross-section of 18.1m width on the axis extending to the Eastern bypass and 17.35m width along Ogbum-nu-Abali Road.

“This cross-section is made up of 2 carriageways, each measuring 7.3m wide,  both of which will be separated by a median of 1.5m width along with the extension to Eastern bypass and a median of 750cm width along Ogbum-nu-Abali Road.

It includes 1m wide drains on either side of the road and of course streetlighting which ease movement at night as well as enhance security.

The Commissioner said, the project like many others commissioned or ongoing will be built to design specifications aimed at guaranteeing a minimum life span requirement of 30 years.