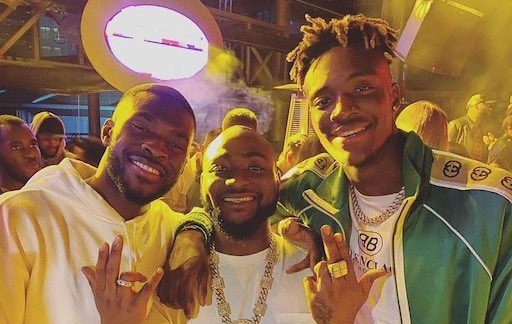 Davido with Fikayo Tomori and Tommy Abraham in Lagos

A photograph of the Chelsea duo clubbing with Davido in the Nigerian commercial capital was published on Twitter handle @chels_UK.

Tomori, 23, now on loan to AC Milan, plays as a centre-back for Chelsea, and the England national team.

He is a player who can claim three nationalities.

He was born by Nigerian parents in Calgary Canada, but was raised in England since he was a toddler.

Tammy Abraham, a striker for the European champions, was also born by Nigerian parents in Camberwell London on 2 October, 1997.

His full name is a long one: Kevin Oghenetega Tamaraebi Bakumo-Abraham, shortened to Tammy Abraham.

Both players have declined to play for Nigeria.

It appears several African players in the Chelsea team are heading to the continent to chill out.

Callum Hudson-Odoi, was also in Accra and was photographed with Ghanaian President, Nana Akufo-Addo.