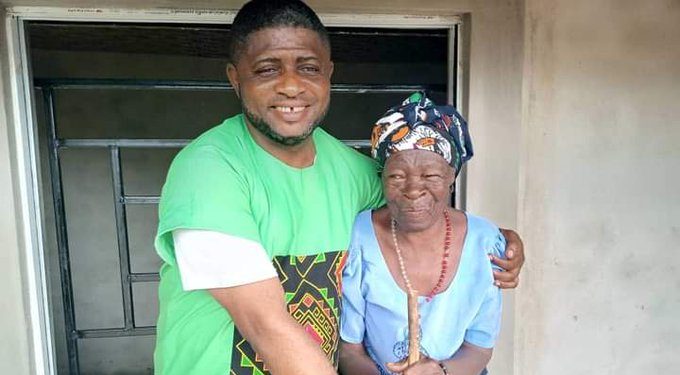 Reverend Fr. Mfa Mdooyonga Solomon of the St Augustine Parish, Makurdi in Benue State has gifted an old woman a house in return for her past widow’s mite generosity.

Solomon was attacked by bandits on 5 October 2020 in his parish with his house stripped of all valuables.

His phones, laptop, ATM cards, clothes, shoes, an undisclosed amount of money all were taken away.

The old woman heard his travail and decided to offer some succour, in the best way she could afford.

She went to the parish and gave Solomon six eggs, in sympathy.

Days after, the Rev. Fr. decided to return the visit of his ‘benefactor’.

He found the woman living in a shack and was possibly shocked that she could have such a heart of gold despite her condition.

He decided to repay the woman in her own coin. He launched a crowdfunding for her and used the proceeds to build a bungalow for the woman.

The incredible story, which has gone viral on Twitter was related on Twitter Thursday by Duke of Benue @Collins Uma

“Robbers attacked Rev Fr Solomon Mfa (St Augustine Parish, Makurdi). This old lady brought him 6 eggs to sympathise with him. He went to visit her and saw where she was living. Then he crowd-funded and built her this house. She moved in 2 days ago.
This is Love”, The Duke of Benue tweeted.

Here are some comments by Nigerians:

She gave out of nothing.
Moral of the story:
1. No one is too poor to give.
2. God Loves a cheerful giver. He sees the heart and will always reward…
3. There’s no sowing without reaping. He said “as long as the earth remainth, seed time and harvest will not seize.

This is what Christianity should be about

So nice of the man, God gave him wisdom to understand life, many would have tagged her a witch for bringing just 6 eggs to the priest, but this man took his time to go visit the mama, that’s the miracle, am so happy to read this

phoenix @ocholi_simeon:
Am moved by what the Old woman did here wow, even when she can’t boast of eating egg yet she sacrifice her little for the priest. Her faith has actually saved her, an example of Prayer answered. And May God bless Fr Mfa for being the instrument of God’s blessings.