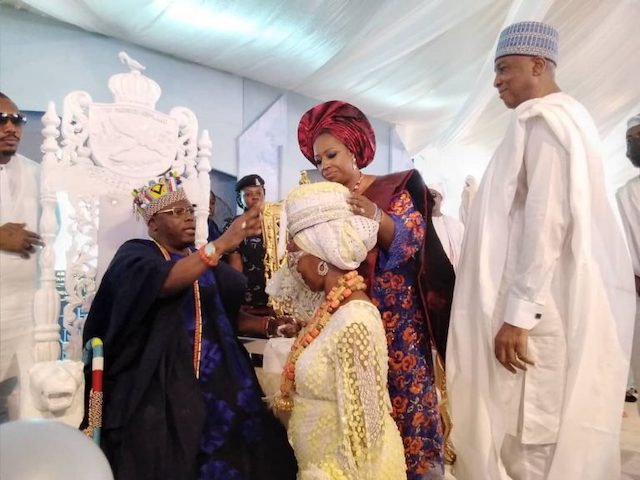 Toyin Saraki, wife of former Senate President is now the Erelu Bobajiro of Iruland in Lagos.

She was conferred with the honour on Thursday by the Oniru of Iruland, Oba Omogbolahan Lawal.

Three foreigners and eight other Nigerians were also honoured by the monarch, for their contributions to the development of the kingdom.

The conferment of chieftaincy titles was part of activities commemorating the first anniversary of Oba Lawal as the Oniru.

The monarch said that the conferment of honours was the beginning of the drive to ensure the collective development of Iruland.

The traditional ruler said that his kingdom would continue to recognise eminent dignitaries for their positive contributions to the growth of Iruland.

He said that among his developmental agenda was to ensure that the Iru kingdom evolved into a sustainable city, with special breed of truly resilient people.

Oba Lawal noted that his blueprint aptly titled: “Let’s Grow Iru land Together (LEGIT)” was an idea conceived to change the narrative of the kingdom.

He noted that the honorary title was a call to service to grow Iruland into one of the most sustainable and desirable communities in Lagos.

“I have come up with the vision “Lets Grow Iru land Together (Legit)”. I believe all my new chiefs will be collectively supporting us to re-develop, re-invigorate, re-generate and re-engineer Iruland.

“I know you are capable; you are able, you have the wherewithal. even your contacts alone should be able to do that.

One of the honoured chiefs, Amb. Michael Tawadrous, thanked the traditional ruler for the honour bestowed on him and promised to continue to contribute to the development of the community.