Al Mustapha: Boko Haram can be stopped in short time 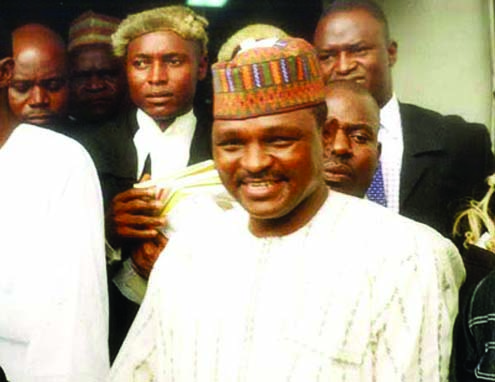 Retired Maj. Hamza Al Mustapha said he has done some research and concluded that the 12 year-old Boko Haram insurgency can be ended in a short time.

Al Mustapha, who was a former Chief Security Officer (CSO) to Gen. Sani Abacha, gave the advice in an interview with NAN.

He has thus advised Maj.-Gen. Farouk Yahaya, the new Chief of Army Staff (COAS), to borrow from his insight.

“Delaying the fight against Boko Haram will be a great disservice to Nigeria. The earlier we crush them, the better.

“Speed is very vital, because we are not fighting a conventional war, speed matters a lot because Nigeria should recover from this speedily as much as possible.

“I know this is possible because I have done some homework,” Al Mustapha said.

The former CSO congratulated the new COAS on his appointment.

“He is our younger brother, I have prayed for him and wished him well on the appointment.

“I spoke with him and what I sent to him in a text message were prayers for him to succeed.

“There are different ways for him to succeed in overcoming the numerous security challenges bedevilling the country, ” he said.

Al Mustapha advised the new army chief to work in synergy with other security agencies to ensure success.

“My advice is that the army should not be alone because it is not a military affair alone.

“Boko Haram for example has been on for more than 20 years from my account, that is from conception to its maturity.

“If you want to contain an insurgency, every single detail of its activities should be on your palm, that is when you can say am on top of the situation.

“You have to get their sources of logistics, their electronic support and capabilities, what they do on daily basis and how they get information among others, ” he said.

Al Mustapha said the army chief must also trace the sources of arms getting into Nigeria resulting in arms proliferation.

“Our security challenge also has its root in the grand design by some powerful countries as far back as 1972 to retard Nigeria’s development.

“That’s why the country is facing security challenges from all facets at the same time.

“Our past mistakes have to do with viewing issues from narrow perspectives and that is why we must be very wide and open now,” he said.

Al Mustapha said the military must hasten its pace in tackling security challenges facing the country so it can return to barracks as soon as possible.

“We need to end all these challenges as quickly as possible, so that the military can go back to the barracks to face its primary role of protecting the territorial integrity of Nigeria.

“Internal security operation has reduced the value of the military because they are taking over the role of the police, which is a disservice.

“We have to end these crises so that the police can effectively take over their function, train and expand their capacity, ” he said.