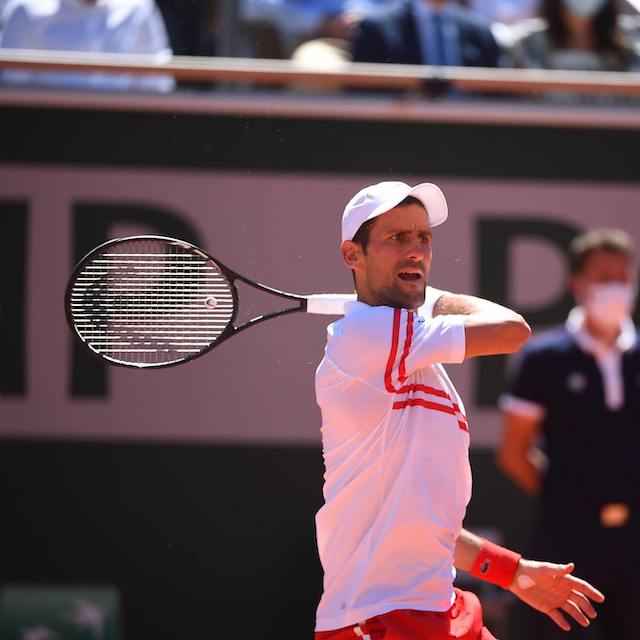 World number one Novak Djokovic clawed its way back from the dead to beat Greek star Stefanos Tsitsipas to win the French Open title on Sunday.

It was his second title in Paris and his 19th Grand Slam, one short of the record equalling 20 titles held by Roger Federer and Rafa Nadal.

Djokovic was almost written for dead in the finals, when Tsitsipas won the first two sets, one by tie- break, the second by humbling the Serbian 6-2.

But Djokovic stepped up his act and really dug deep to clinch the third set and the other two sets.

The match was like a repeat of the quarter-finals, when Djokovic came from two sets down, to even scores with Italian Musetti and then led 4-0 in the final set before the Italian called it a day.

Tsitsipas in first two sets had Djokovic’s back on the rope, recording more than 12 aces and having first serve percentage significantly better than Djokovic.

He appeared to have lost gas in the last three sets and even had a medical time out, after the third set.

As a commentator remarked, when it comes to strong mentality and saving energy for latter sets, there’s no competition for Novak Djokovic.

“It was again an electric atmosphere. Nine hours of tennis in less than 48 hours,” Djokovic said on court.

“It’s not easy; physically and mentally it was very, very difficult for me, these three days.

“I believed in my capacities and in my game. It’s a dream come true, ” he added.

Tsitsipas, 22, looked forlorn as he slumped in his chair.

He fell short of striking a blow for the next generation trying to loosen the grip of the old guard.

“It was a big fight out there, I tried my best and did as much as I could,” he said.