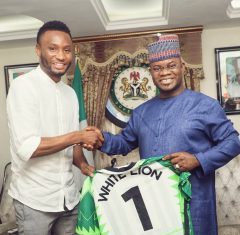 Mikel Obi, a popular Nigerian Footballer, has pledged his support and approval of Yahaya Bello’s political aspirations as he visited the Kogi governor on Sunday in Abuja.

Obi said that it was time for the youths to come out and take leadership positions across all boards for the betterment of Nigeria.

He added that youths should be given a chance to get the change Nigerians clamour for.

He also lauded Bello for his achievement in Kogi in the areas of security, healthcare, infrastructure, education, and agriculture.

The soccer star noted that such efforts when impacted at a higher level would bring further development for Nigeria.

“My main aim is to come here to show my appreciation and to thank him for all the things he has been doing for the people and also to support him in whatever future political positions he wants to go into.

“I will like to be there to support him, to be there by his side through this journey for him to achieve whatever he wants which is for the betterment of Nigeria,” he said.

Obi said he was hopeful that Yahaya and himself could work together as a team to achieve success.

“What better person to lead the youths than him, because he has been doing all these good works and that is why I am here to see whatever way I can come in.

“To get the youths together to know and see how we can make things better for our country and how we can align to achieve all that”, Obi said.

Responding, Bello thanked Obi for the visit and his pledge to support the course for youth leadership.

He reiterated that it was time for the youths to take the opportunity that had presented itself.

He thanked the ace footballer for lauding his efforts in the state, noting that the security and welfare of his people and Nigerians remained his priority.

The governor noted that when there was political stability in a country, economic prosperity and development would be achieved.

He urged Obi to use his voice and his platform to advocate and call on youths to vie for leadership positions to change the existing narratives in line with the current realities.

“We can always come from our comfort zone to support each other.

“If we do not take charge we are going to blame ourselves tomorrow. The opportunity has come and it is now, not a second later.

“So you are going to integrate with us, not just as the superstar, Mikel Obi, but as one who will be in tune with what is happening at home politically.

“In the western world, because they have political stability that is why there is safety and security,” the governor said.

Bello said because there was safety and security outside the country, the economy was stable which was why everyone was rushing there.

“We can as well do same. First economic stability will guarantee security and safety and then every other thing will follow.

“Even if it is just to talk, you have millions of followers, our achievements are online where you can click, take your time to go through.

“When you go through, send it through your social media handles and tell your advocates and let them see it”, Bello said.