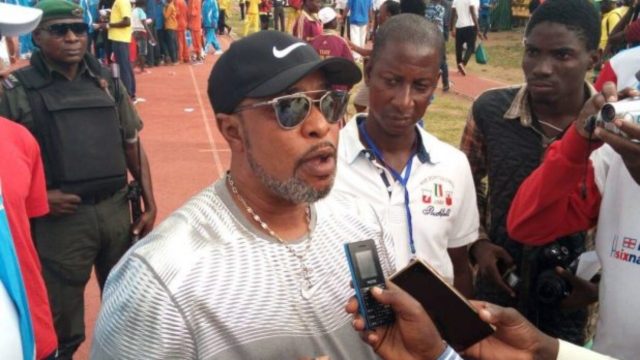 Tonobok Okowa on Monday emerged as the new President of the Athletics Federation of Nigeria (AFN), pledging to ensure unity in the divided Nigerian athletics family.

At the AFN Extraordinary Elective Congress held at the Moshood Abiola National Stadium, Okowa was elected unopposed with Congress delegates still giving him 41 of the available 44 votes.

The News Agency of Nigeria (NAN) reports that the Congress which had 51 delegates in attendance had 44 of them taking part in the voting process.

Delegates were drawn from the state athletics associations across the country, the zonal sports bodies, as well as other sports stakeholders such as the para-military and military.

Others are representatives of the national body of Physical Health and Exercise Practitioners (NAPHER-SD), the National Association of Women in Sports (NAWIS), international sports bodies, institutional sports bodies and athletes.

The representatives of the technical officials/coaches bodies, as well as the philanthropists/sponsors/ex-officio, were however not available.

The Congress which was presided over by Ambassador Haruna Manta, Chairman of Niger state athletics association, also elected the federation’s First Vice-President and Second Vice-President.

The election was conducted by a team led by Elias Gora, a former Secretary-General of the Nigeria Olympic Committee (NOC).

Gadzama Tafida-Wadzani who represents the North-East zone was elected unopposed First Vice-President, with 43 of the 44 votes.

Rosaline Collins-Okah who represents NAWIS was elected Second Vice-President with 42 of the 44 votes.

The three of them are joined on the new AFN board by Manta, representing the North-Central zone, Yusuf Liman (North-West), Victor Okorie (South-East) and Solomon Alao (South-West).

Representatives of the technical bodies/coaches association, as well as the philanthropists/sponsors/ex-officio, will join the board alongside the Federation’s Secretary-General for a 14-man board.

Okowa, who is Chairman of the Delta State Sports Commission and represents the South-South zone on the board, while thanking the delegates for electing him pledged to reach out for unity.

“We have had free and fair elections here today, and I thank you all for this. I will not disappoint you.

“However, I must acknowledge that there was out their others who conducted one election or the other.

“We will reach out to them so that we will have a united family, in order to jointly do this job of raising more athletics talents and developing the existing ones to move to greater heights,” he said.

Meanwhile, in the other AFN board elections conducted in Birnin-Kebbi by the Ibrahim Gusau-led faction, Gusau was re-elected President.

A statement simply signed “Media Coordinator AFN”, said Gusau was re-elected earlier on Monday after he polled 20 votes to defeat Uche Muoma who got two votes from the 22 delegates present.

It added that Sunday Adeleye got 15 votes to become First Vice-President, ahead of Solomon Abari who had 4 votes and Patrick Estate with 3 votes.

For the post of Second Vice-President, Nneka Ikem-Anibeze polled 13 votes ahead of Esther Hindi who came close with 8 votes and Janet Wilson who managed one vote.