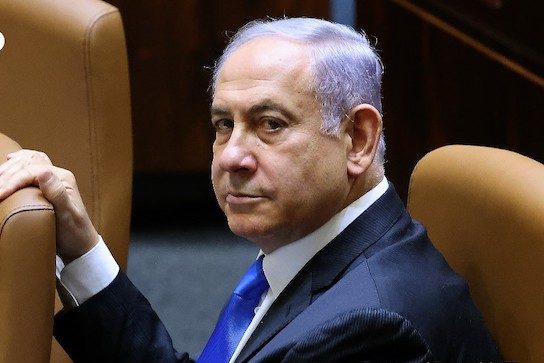 The traditional handover ceremony was not scheduled at the prime minister’s office, where Netanyahu was expected to meet Bennett later on Monday to brief him on state matters.

The last time Netanyahu was unseated as Israel’s leader, in 1999, he ended his first term in office with a glass of wine in his hand and affable words of welcome to then-Labour party leader Ehud Barak, who defeated him at the polls.

Asked why there would be no such scene now, Topaz Luk, a senior aide to Netanyahu, told Army Radio: “That’s just what happens.”

Netanyahu, he said, was “filled with motivation to topple this dangerous government as quickly as possible”. Luk declined to disclose Netanyahu’s comeback strategy, pointing only to the new administration’s slim margin of support in parliament.

Luk said the incoming government was receiving briefings from Netanyahu’s diplomatic and security advisers to ensure an orderly handover.

The Knesset approved by a razor-thin majority of 60-59, a new administration led by Bennett, a nationalist whose views mirror Netanyahu’s on many issues.

In Tel Aviv, thousands turned out to welcome the result, after four inconclusive elections in two years.

“I am here celebrating the end of an era in Israel,” said Erez Biezuner in Rabin Square.

“We want them to succeed and to unite us again,” he added, as flag-waving supporters of the new government sang and danced around him.

A combative Netanyahu, 71, said he would be back sooner than expected.

“If we are destined to go into the opposition, we will do so with our heads held high until we can topple it,” he told parliament before Bennett was sworn in.

After holding its first meeting late on Sunday, Bennett’s new cabinet was invited for a traditional group photograph, showcasing incoming governments, at the official residence of President Reuven Rivlin.

With little in common other than a desire to unseat Netanyahu, the patchwork coalition of right-wing, centrist, left-wing and Arab parties largely plans to avoid sweeping moves on hot-button issues such as policy towards the Palestinians.

Instead, the coalition will focus on domestic reforms.