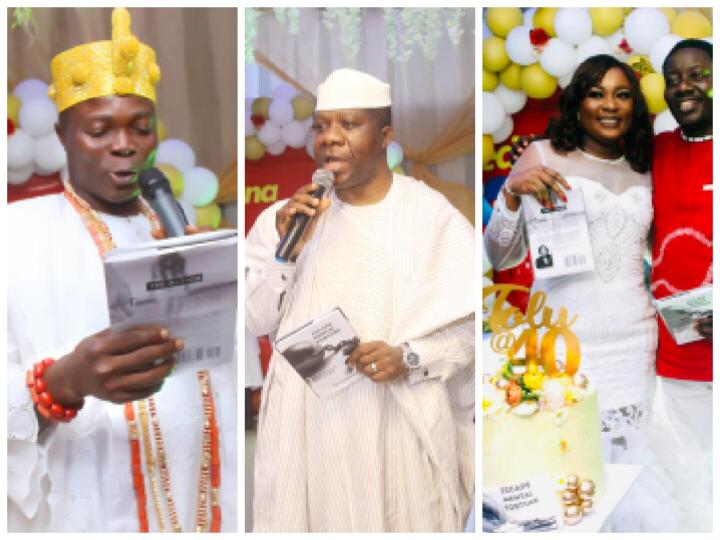 It was an evening of glamour and glitz on Thursday, 10 June, 2021, at Lamango Restaurant, GRA , Ikeja , Lagos. That was when Lagos popular blogger and music artiste , Tolu Meduna, presented her book, Escape Mental Torture, to the public.

The occasion which also coincided with her 40th birthday had many dignitaries, including traditional rulers, in attendance. Some of these dignitaries include , distinguished Senator , Opeyemi bBamidele, representing Ekiti central at the upper chamber of the National Assembly; Hon Moruf Akinderu – Fatai , commissioner for housing , Lagos state; HRM Oba Oyelude Makama Tagbosun 11 , the Olowu of kuta; Oba Abioye Nureni Oyewale , the Olubode of Bode Osi among others.

Escape Mental Torture is a story of sexual abuse/molestation. Dr. Okonkwo , the book reviewer, however further described the book as a memoir or the author’s experience which therefore serves as an encouragement to anybody with the same life story that there is light at the end of the tunnel.

Senator Bamidele , in his own remarks, saw the book as an eye opener to the menace of sexual abuse and molestation . He further used the occasion to salute the tenacity , courage and can – do – spirit of the author .

In her remarks, Meduna described the book as a victory for womanhood, urging women nursing both physical and emotional molestation to join hands with her to purge the society of this menace