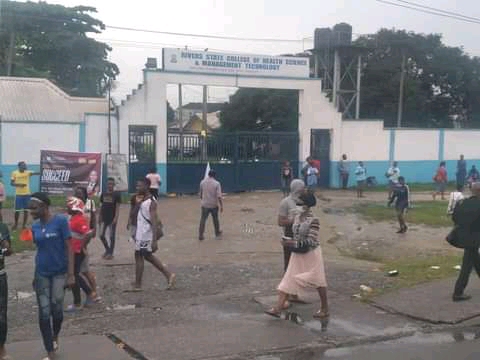 Over 200 Students of the Rivers State College of Health Sciences and Technology in Port Harcourt on Tuesday staged a protest along the Ikwerre Road over poor amenities.

The aggrieved students blocked the Mile 4 axis of the Ikwerre Road in Port Harcourt and caused a heavy gridlock around the area, forcing motorists to use alternative routes.

The students who defied an early morning downpour to stage the protest demanded the provision of water and electricity in their hostels by the institution’s management.

During the peaceful protest, the students also lamented that their courses are not accredited.

They claimed that the school authorities have been pressuring students to pay so that their Courses could be accredited.

The students carried placards with different inscriptions depicting the state of affairs in the school.

Some of the placards read: “We need Light,” “We don’t have water, light, how do we pass?” “Come and accredit our courses”, “Provost must go” and others.

The President of the Students Union Government, Comrade ThankGod Nleye, said the students’ action was long overdue as the union has exhausted every means to get the state government ameliorate the many challenges confronting the school.

“We have been appealing to the state government to come to our aid previously”, Nleye said.

“We have used the media, written letters, embarked on visits.

“These are issues we have been clamouring for. There is no water, no light in the school.

“We have also been clamouring that government should help so our courses are accredited.

“We have appealed to the governor to come and rescue the school financially. Students here are seeing him do it in other schools, why is our own different?”

The Students Union Government had in past drawn the attention of the government through protest letters and media advocacy over the unhealthy environment for teaching and learning nothing concrete has been done.

The students threatened to continue the protest until their demands are met.

The school’s provost was unreachable as his mobile lines switched off.