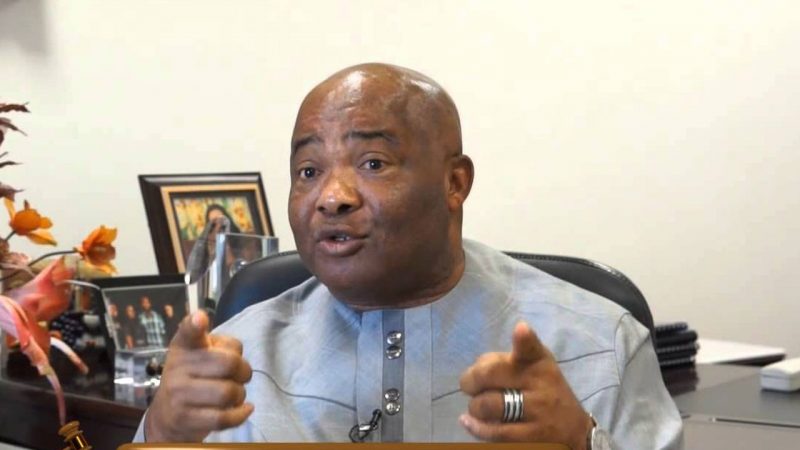 Governor Hope Uzodimma of Imo State has enjoined all politicians who are involved in the crisis and bloodletting business in the state “to repent and refrain forthwith or be ready to face the wrath of God.”

The Governor dropped the bombshell on Tuesday when he paid a condolence visit to the Police Command in Imo State to commiserate the leadership and personnel over the death of some of their members at the peak of insecurity in the state and in their efforts to repel the bandits who attacked them and their formations in the State.

According to Uzodimma, his government was working out a Social Welfare package to encourage policemen and all security agencies working in Imo.

The Governor said that the social welfare package is “aimed at motivating and encouraging the security agencies in the State, and enhancing the performance of the security men and boosting business activities in the State so that the welfare of Imo people will be guaranteed.”

The Governor also highlighted the need to ensure all the policemen serving in Imo in addition to what the Nigerian Police Force has in place already for her personnel.

He said: “We intend to ensure men and women of the Nigerian Police working in Imo State to an extent that where there is any casualty not only the palliative measure will be provided by the government, the Insurance Company will take the responsibility of making sure that the liabilities and obligations of those who died, including family obligations, will be contained in the policy.”

Governor Uzodimma who expressed serious sympathy for those who lost their lives to secure Imo State and its people noted that “in everything we do in life, what will be will be and what will not be will not be,’’ emphasizing that the Nigerian Police is the last hope of the common man in terms of security.

“If the Nigerian Police is challenged, the security and protection of Nigeria are challenged,” the Governor said, adding that “Government will not only partner with the police but will do her best to supply insufficient number, what they need to succeed in their operations.”

He reminded the officers and men that their role is critical in society and commended them for having played such a role very effectively.

Governor Uzodimma also advised the officers and men to show courage in the discharge of their duties whenever the bandits try to test their professional competence. He encouraged them to defend themselves as much as possible from any external aggression that threatens their lives and that of the property entrusted in their care.

The Governor reiterated that Government is doing all within her powers to reach out to all families that lost their loved ones recently, including their children and wives, and extended his condolences to the entire police formation and families of the victims in Imo State who were affected in the effort to return sanity to Imo State.

In addition, the Governor appealed to all Divisional Police Officers (DPO’s) in Imo state to ensure that all criminals in the local governments, communities and rural areas are arrested and made to face the law. He promised that at the State level all who had been found culpable and confessed to crime will be charged to court and made to face the law.

The Governor thanked the Inspector General of Police (IGP) for the support he gave to Imo State during the time of the crisis.

He also expressed sincere gratitude to the Imo Government and her people to President Muhamadu Buhari for accepting to support Imo fight insecurity through the State Command.

Earlier in his welcome address, the Commissioner of Police, Imo State Mr Yaro had welcomed the Governor on the visit, describing the visit as significant in three ways.

“First, it is the first time in 40 years of Police formation in Imo State that a Governor will pay a condolence visit to the Police Command in the State.

“Secondly, the visit has demonstrated to a large extent the cordial relationship as well as the value the Governor attaches to the Police operations in Imo State.

“Thirdly, the visit has rejuvenated the morale of the Police Command to the highest level which acts as a boost and encouragement for the police to bounce back to do what they know how to do best.”

Yaro used the opportunity to reassure Imo people that the State’s policy formation is back to her normal duties, “which goes to mean that Imo is back to business.” He called on Imo people to come out and go about their normal business without molestation and harassment.

He further thanked the Governor for all his support to the police and urged Imo people to cooperate with his officers and men as “the police is your friend.”