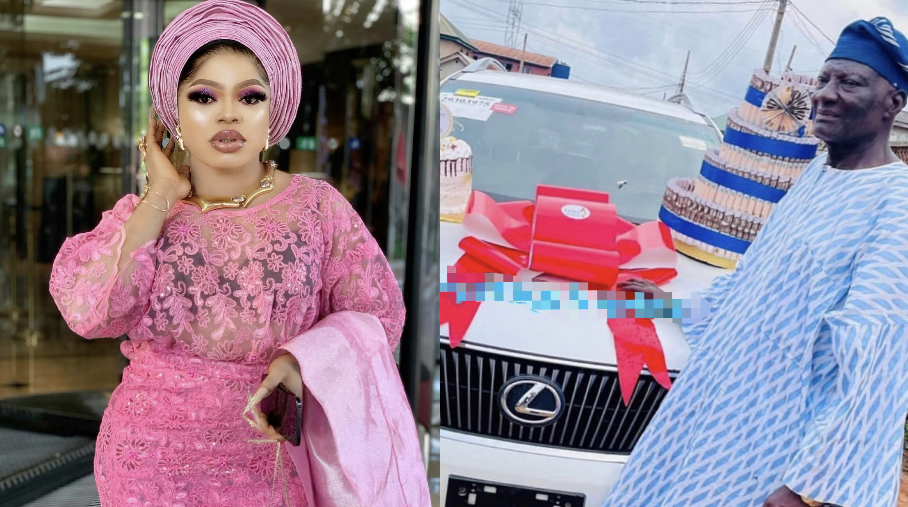 Popular Nigerian crossdresser Idris Olanrewaju Okuneye better known as Bobrisky, has surprised his father with a new Lexus SUV as a birthday present.

The effeminate entrepreneur took to his Instagram page on Tuesday to share pictures of the new vehicle.

He also accompanied the photos with a terse post wherein he celebrated his father while also offering words of prayers for him on his special day.

“It’s my dad birthday today!!! So I bought him dis clean machine…to surprise him today. Happy birthday daddy, may you live long for me. I can’t wait to continue spoiling you,” he wrote.

In a follow-up post, Bobrisky also revealed plans to surprise his grandmother on her birthday billed for December.

A short video emerged online showing the internet personality dressed in a long black jalabia (gown), a face cap and no makeup on. This is quite unusual as he is known to wear female clothing.

Bobrisky who hails from Ogun State has severally made the headlines after claiming to be Nigeria’s first transgender.

In 2019, the National Council for Arts and Culture (NCAC) described him as “national disaster” but human rights groups issued a statement to protest allegations of threat and harassment against him.

He had last year revealed that he opted for crossdressing in order to make ends meet after 25 years of being a man.