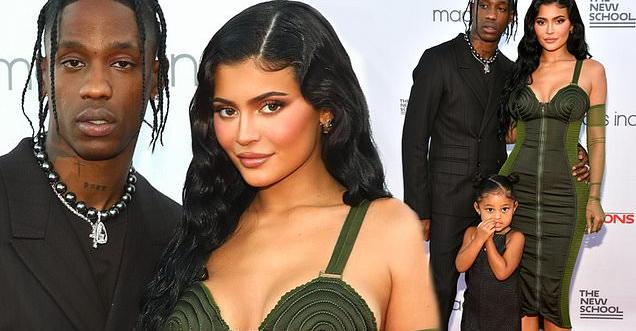 The couple cozied up to one another, while posing on the red carpet with their three-year-old daughter Stormi, at the Rooftop at Pier 17 in the Big Apple City.

Travis, who was one of the evening’s high profile honourees referred to Jenner, 23, as his ‘wifey’ while gushing over his family during his emotional acceptance speech.

‘Stormi, I love you and wifey, I love you,’ declared 29-year-old Scott, who was recognized for his ‘contributions in fashion, design, entrepreneurship, the arts, and social justice,’ according to Billboard.

A source told People that Travis and Kylie ‘were being very sweet and cute together’ behind-the-scenes and that the lovebirds ‘were holding hands and seemed fully back on.’

The reconciliation comes 20 months after the couple shocked fans when they called it quits in October 2020.