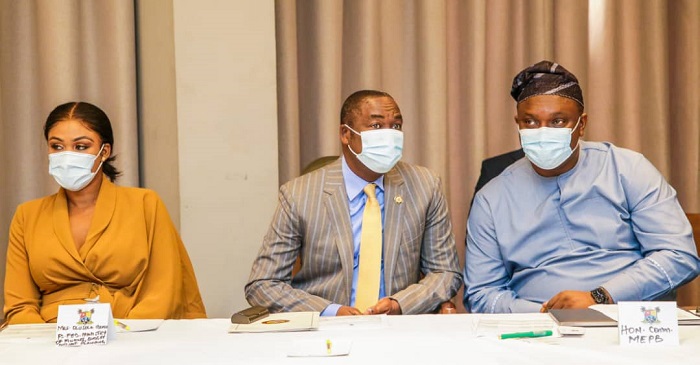 Lagos State Governor, Mr. Babajide Olusola Sanwo-Olu has stated that no meaningful progress can be achieved by the country without effective planning.

Speaking today through his deputy, Dr. Kadri Obafemi Hamzat at the Opening of a Two Day Zonal Technical Session on the Preparation of the Medium-Term National Development Plan (2021-2025), the Governor described planning as the basis for action and provides direction for Agencies of government to act in line with clearly specified and articulated goals to be achieved in all sectors of the economy.

He stated further that part of the major goals of the Medium-Term National Development Plan is to lift 34million Nigerians out of poverty and generate 25 million jobs by 2025.

The Governor said, “Towards achieving this goal, the planned total investment size which will be allocated to sectors programmes and project in the plan is estimated at 348.1 Trillion Naira. These goals are no doubt laudable as it seeks to address the critical challenges of poverty eradication and growing unemployment rate among our youths.”

Sanwo-Olu expressed his belief in the achievement of the goal if all stakeholders work together and show commitment required through the step by step implementation of the strategies, policies and programmes that will be articulated in the final development plan document.

Speaking further, the Governor stressed that the level of development achieved in the State especially in sustaining its leading position as the nation’s commercial and industrial nerve centre is attributable to the commitment of successive administrations to the State Development Plan started with a blueprint for a New Lagos in 1999 and later metamorphosed into the Lagos State Development Plan 2021 – 2025.

The Governor further disclosed that the State is presently in the process of developing a framework for a 30years Development Plan to replace the current Lagos State Development Plan (2012 – 2025) which expires in 2025.

He added that, within the new plan, the government has also set out development goals, policies and strategies for the new decades (2021–2030) which was the subject of discussion at the Private Sector led 8th edition of Ehingbeti Summit held earlier in the Year.

He added that all these are aimed at achieving sustainable economic growth, creating a conducive environment for investment to thrive, maximizing the competitive and comparative advantage of the state, harnessing opportunities and potentials in less optimized sectors like entertainment and tourism, achieving food security among others.

While commending the Federal Government for organizing the 2-day Zonal Technical session with the objective of seeking the input of sub-national governments in the preparation of the Medium-Term National Development Plan (2021-2025) for effective implementation, monitoring and evaluation, the governor said, the state is prepared to key into the opportunity provided by the federal government through the platform to ensure that the yearnings and aspirations of the people of Lagos State are adequately reflected in the development plan.

He said “We will attach high premium to issues relating to infrastructural renewal and development and capacity building programmes that will not only make our youths employable but also targeted at enhancing their entrepreneurship and wealth creation skills.”

Earlier in his welcome address, the Commissioner for Budget and Economic Planning, Mr. Samuel Egube stated that the Zonal Technical Workshop is aimed to develop a framework through which stakeholders in all sectors of the economy public, private and civil society can synergize and contribute to the Improvement of quality of life of the people in the Southwest States and the country at large.

He further stated that “each participating State must have a defined vision it intends to achieve which will provoke increased productivity, through effective and efficient resource management that is driven by well-equipped human capital, with the ultimate goal of improving the standard of living of the people of Southwest region of Nigeria”.

He further stated that the LSDP of 2012-2025 captures past strategic development plans and statements, and brought them into a harmonious and coherent whole. It helped to present a baseline picture of the State in its manifold aspects: Economic Infrastructure, Social Services and Protection, and sustainable Environment; while also providing the overall Strategic Framework and Direction for achieving the State’s Vision.

In his goodwill message, the Federal Reform Lead, FCDO-PERL Mr. Umaru Abu stated that the much-anticipated Medium-Term National Development Plan and the Nigeria Vision 2050 are sets of agreed values, actions and pathways for achieving this common future. He said, “the participation of sub-nationals is critical to not just the development of the much-anticipated plans, but also to their implementation and sustainability”.

Mr. Abu called for more efforts at exploiting the potential synergies between national and sub nationals for the good of the Nigerian people.

He also stated that a coordinating measure at different levels of government and between interacting policies is ever more expedient, noting that “due to the interconnectedness of the various dimensions of the plans, particularly with the depth of this participation, an integrated and coherent approach is needed to effectively tackle the complex issues at hand, ensuring that the interactions among various policies in the economic, social, environmental, legal and political domains support the agreed upon pathway towards inclusive sustainable growth”.

Mr. Abu called on state governments to generate the necessary support for sustained political commitment, establish coordination mechanisms to coordinate progress and invest in effective systems for monitoring and analysis, with transparent reporting on results.