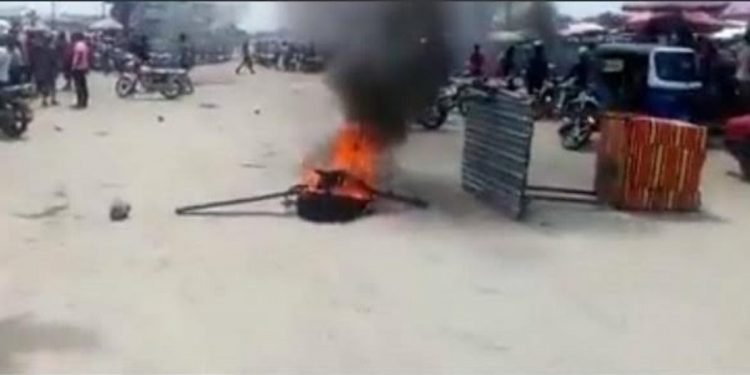 A police vehicle has been set ablaze as mob protests the killing of an okada rider by policemen on stop-and-search duty at Orhuwhorun, a community in Udu Local Government Area of Delta State.

Orhuwhorun is a suburb community of oil-rich Warri town, in the Niger Delta region.

The incident was said to have occurred at about 9:45am on Thursday, at Orhuwhorun Police Post, close to Free Indeed Church Junction, Sector F of DSC Township.

The cause of the death was unclear, as different sources gave varying accounts of what likely transpired between the victim and the police officer.

A sources claimed that the deceased was shot for allegedly refusing to give a N100 bribe to the fleeing officers.

Another source however suggested that the cause of the death could have been accidental discharge from one of the police officers’ rifle.

The source added that the victim whose identity could not be verified as at the time of filing this report, died on the spot.

Angered by the incident, a mob protesting the killing, reportedly set ablaze, an operational vehicle belonging to the police officers.

The angry youths also made bonfire on the tarred road leading into the community.

As at the time of filing this report, it was gathered that a team of soldiers have been drafted to the scene to return normalcy to the troubled area.