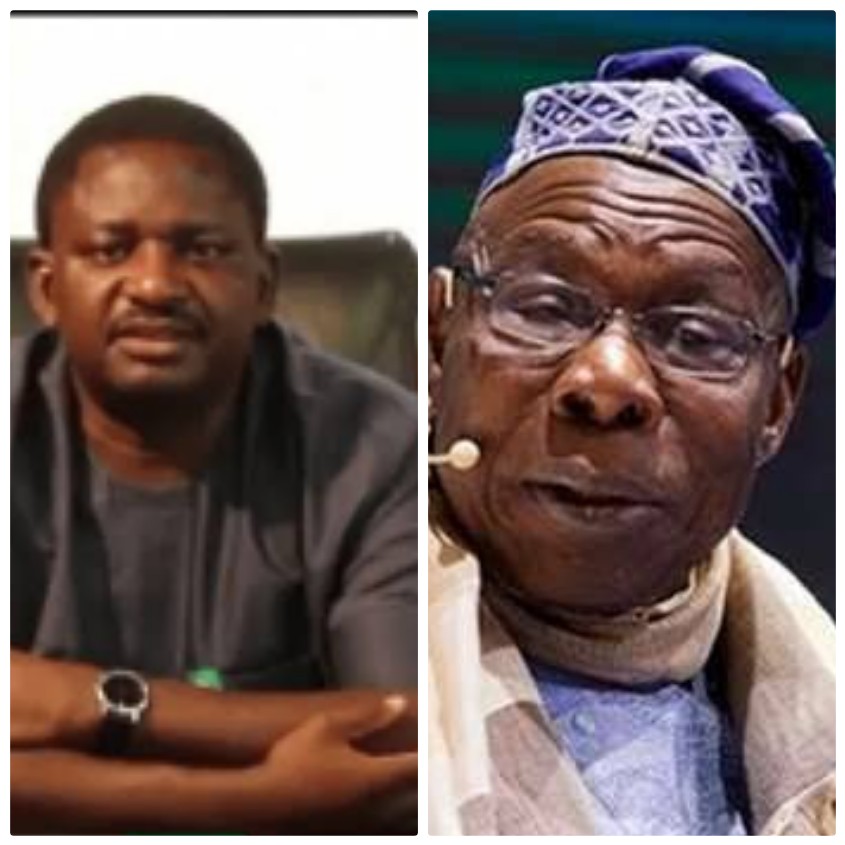 Femi Adesina has identified former President Olusegun Obasanjo as one of the persons who contributed to the current upheavals in Nigeria.

Adesina stated this in his weekly article titled “NIGERIA’S UNITY AND ALL THE IBERIBERISM.”

According to him, Nigerians speaking about Nigeria’s unity and the possibility of disintegration are now at the point of Iberiberism – a word he defined as political foolery and trickery or stupidity.

He, however, added that Obasanjo contributed to the current political foolishness in Nigeria through his actions and inactions.

He also warned the former president to mind his thoughts and language.

The presidential aide also knocked activists, others who contributed to the Democracy Day Protest on June 12.

Which one is Iberiberism again o? What kind of English shall we not hear in this country?

Well, the word is not regular English language, neither is it my creation. The copyright belongs to former Imo State governor, Rochas Okorocha, who created something being fast accepted in English from the Igbo word, Iberibe, meaning foolery, trickery, or stupidity. It is the act of being deceitful or untrue.

Okorocha engaged in neologism when he created the word Iberiberism, and used it to describe political foolery and trickery or stupidity.

Let’s divert a bit. There was another Imo man, who was a master neologist. His name was Chief Ozuomba Mbadiwe, man of timber and caliber, pillar and caterpillar, the political juggernaut. He would tell us that “come would soon come to become,” and other such ticklish expressions.

I once interviewed Chief Greg Iheanacho Mbadiwe, who regaled me with his father’s ability to create words. He said as a boy, he was struggling with another young boy in his father’s compound, not knowing that the father was watching with keen interest from upstairs.

When the tussle became too long, Chief Ozuomba Mbadiwe bellowed: “Iheanachooooo. Will you slap that boy, and let him be seconsaimabalism.”

Holy Moses! What does the word mean? You will search all the dictionaries in the world, including the ones that have not been compiled, and you will never find the word seconsaimabalism. It’s a creation of Chief Mbadiwe, just as Okorocha created Iberiberism.

Now, back to the main issue. The sabre-rattling about Nigeria’s unity and the possibility of disintegration has got to the point of Iberiberism.

Some people have no other business than doomsday predictions of a crumbled, collapsed Nigeria, as if they actually fast and pray for that eventuality.

When Chief Olusegun Obasanjo was President between 1999 and 2007, they predicted that he was going to be the last President of a united Nigeria. It didn’t happen. When Umaru Yar’Adua came, they said he was too sick to hold Nigeria together. The country stood. Under Goodluck Jonathan, they said the man was too weak, and different components of the country would soon say, ‘to your tents oh Israel.’ Nigeria survived. And for six years under Muhammadu Buhari, they have not changed their songs. The Somaliasation of Nigeria was on the way. The Fulanisation of the country would be the final death knell. But Nigeria lives. It trudges on from day to day, month to month, and will surely survive.

Yes, sing it from Abeokuta to Kaura Namoda, from Isokoland to Brass, from Orlu to Nsukka, Nigeria will survive. To, therefore, continue to wail about disintegration is now bordering on Iberiberism. We need to change our tongue, and our song. Nigeria go survive.

Why do some people always dwell on the negative? They have been seeing nothing but negative for decades, but Nigeria remains sturdy and steady. Yes, countries do fail, collapse, crumble, but Nigeria will survive. Let them change from malediction to benediction. It will be well with this country.

Some fathers of the land will not fold their hands and see Nigeria go down. Fortunately, we have one of them as President now. The young Muhammadu Buhari spent 30 months in the frontlines as a young army officer, fighting the war of unity. And he has said it: we will not be around and watch Nigeria go down. Never. We will rather speak to insurrectionists in the language they understand.

And what of Olusegun Obasanjo, a civil war hero. Despite all that he has contributed to the current upheavals by his actions and inactions, words and bile, he says it is idiotic to wish Nigeria disintegration now. Good. But let us put our money where our mouth is. Let Baba mind his thoughts and his language.

Last Saturday, as Nigeria celebrated Democracy Day, some people wanted to stoke protests, riots and destruction. Did the system allow it? Not at all. Should it have been allowed? Not when there is still law and order in the land. Only anarchists would set the country on fire in the name of Democracy Day protests. And it was sad, tragic, to hear some so-called activists asking the police to apologize to Nigerians, for not folding their arms, and allowing the country to go into a tailspin. Anarchists masquerading as activists. And they would be the first to show a clean pair of heels when things go awry, leaving innocent people to suffer. Kudos to our law enforcement agents for being professional. It’s the way to go.

There cannot be development without peace. Nigeria, despite severe security challenges, is taking giant strides in development, particularly infrastructure. President Buhari was in Lagos last week to commission Lagos-Ibadan rail project, a maritime security project, Deep Blue, costing millions of dollars, and to handover massive security equipment to the Nigeria Police. This week, he has been in Maiduguri, Borno State, to also commission landmark projects. Nigeria is making progress, despite all the odds.

Next year, the last full year of the current administration in power, the country, by the grace of God, will witness the commissioning of legacy projects. Roads, bridges, gas projects, many others. Why then would anybody wish the country death? That would be Iberiberism at its height, and such people should stop it. They should begin to speak peace, rather than discord, they should begin to speak the language of God, rather than that of the accuser of the brethren. Nigeria will survive.

Nigeria will survive. The polity will endure. And the component parts will live together in amity and brotherhood. Any other option is Iberiberism.