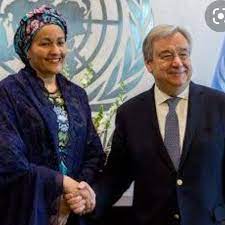 Ms. Amina Mohammed, the UN Deputy Secretary-General, said the re-appointment of Antonio Guterres as Secretary-General by the 193 members of the global body was a vote of confidence in his leadership.

Mohammed told the News Agency of Nigeria (NAN) in New York that the appointment of Guterres was coming at a time of extremely difficult circumstance for the world arising from the COVID-19 pandemic.

He was nominated by his homeland, Portugal, and appointed by acclamation of the General Assembly, following prior endorsement by the UN Security Council for a second term that runs from Jan. 1, 2022, to Dec. 31, 2026.

The UN deputy scribe regretted that the pandemic had impacted negatively on the health and economy of the world.

She, however, said Guterres would focus on getting the world out of COVID-19 in his second term in office, adding that being at the top of the UN was a service to humanity.

“It (re-appointment) is an honour, it is a humble privilege to be there; the first term has been under extreme circumstances, especially in the last two years of COVID-19.

“So, to have that confidence to re-elect the secretary-general is a vote of confidence in his leadership, in his ability to bring countries together and to move the agenda for peace, human rights and development forward,” she said.

Mohammed, who was immediately told by the UN chief to join him in his second term, said the leadership team would be helping member states to recover from the devastations caused by the pandemic.

“Now, what we have ahead is how to recover from this pandemic, which has had massive effects on the economies around the world.

“More so, it has had effect on the heath of the people; we have to focus on vaccination, getting vaccination for everyone.

“So that we can open up our businesses, open up our economies, and we have to put the investment that is required for economies to recover,” said Mohammed.

She said responses from the global community would determine the recovery.

“It the job of the secretary-general and his management to facilitate that and to support member states to recover,” she said.

However, while speaking with journalists after taking the oath of office for a second term on Friday, Guterres said he had extended an offer to Mohammed to continue in office.

“After being elected, I have the pleasure to invite the deputy secretary-general to remain in my second mandate and I hope she will accept,” he said.

Mohammed, who was standing behind Guterres at the press briefing, also responded: “absolute honour.”

The UN deputy chief had previously served as the Special Adviser to Ban Ki-moon on post-2015 development planning, which focused on the 2030 agenda for sustainable development goals.

Mohammed, who is serving as the fifth deputy secretary-general of the UN, previously served as Nigeria’s Minister of Environment from 2015 to 2016 and was a key player in the post-2015 Development Agenda process.

The deputy secretary-general had also served as Senior Special Assistant to former Nigerian presidents on the Millennium Development Goals.

She was appointed in 2012 by former UN Secretary-General, Ban Ki-moon, on Post-2015 Development Planning that paved the way for the Sustainable Development Goals.