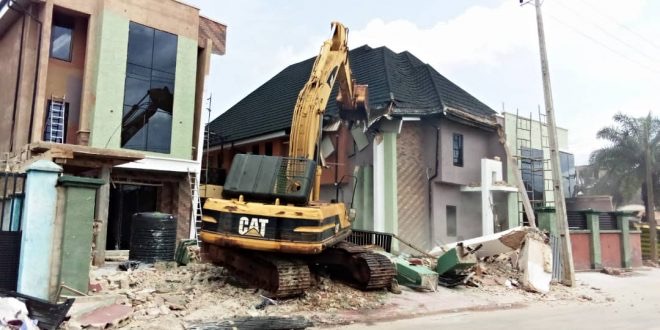 One of the demolished structures

The Edo State Government has warned property developers erecting buildings without approval from relevant regulatory authorities to either discontinue or remove them immediately.

The Secretary to the State Government (SSG), Osarodion Ogie, gave the warning in a statement on Tuesday.

He noted that the state government has intensified the removal of shopping malls, hotels and other commercial buildings erected without appropriate approvals from the relevant regulatory authorities.

Recall that the state government had on Monday rolled out bulldozers for the demolition of a property situated at 13 Aideyan Street, on the Ihama axis, and another building under construction at 90, Akenzua Road, Benin, with over 60 stores.

The SSG disclosed that the exercise is aimed at ensuring order and sanitizing the built environment space, in line with the extant laws and guidelines in the state for the benefit of the generality of Edo people.

The statement reads: “The Edo State Government hereby informs the general public and property developers in particular, that government is intensifying the removal of shopping malls, hotels and other commercial buildings erected without appropriate approvals from the relevant regulatory authorities.

“The exercise is aimed at ensuring order and sanitizing the built environment space, in line with the extant laws and guidelines in the state for the benefit of the generality of Edo people.

“In essence, all buildings and structures planned, being developed or completed in different parts of the state, without approvals, are to be discontinued and (or) removed. The same applies to such structures being embarked upon in unapproved locations across the state.

“The state government reiterates its commitment to ensuring the protection of lives and property and promotion of orderly development of the built environment for the benefit of the good people of the state,” Ogie stated.

It was however gathered that the hotel was demolished because it was a property converted from a residential apartment to a hotel, without approval from the appropriate authority.

Meanwhile, the All Progressives Congress (APC), has condemned the recent demolition of private properties in the state capital, Benin, by the Governor Godwin Obaseki-led administration, on the excuse that the owners violated extant town planning legislation.

The party, in a statement signed by its state chairman, Col. (Dr.) David Imuse (rtd), insisted that the government did not follow due process, and there is no evidence that the owners were served notice of infringement or intention to demolish.

He said it was “distressing that the Obaseki government is celebrating these demolitions like a rampaging occupation force.”

Imuse further noted that “such actions by the government is an illegality, and amounts to willful and wanton destruction amidst excruciating unemployment rate, decayed infrastructure, a worsening governance system, and unprecedented poverty in our State.

“They did not start the buildings overnight. Relevant authorities cannot say they were not in the know of their construction. Moreover, the owners meant well for the State by investing their hard-earned resources running into millions of naira, into the properties designed to create jobs for the youths of the State.”

The APC in the State argued that in civilized climes a responsible government would have given the owners the option of paying fines and directives to redesign the said properties according to approved plans or gone to court to obtain relevant orders.

“Whereas previous demolitions targeted members of the APC, recent demolitions are targeting the same investors the government claims it is searching for; an indication which has further shown that the PDP government in Edo state does not have the interest of the people at heart, but is only out to repress and plunge our state into untold hardship,” the statement said.

Reacting to the Edo APC’s statement, the State government insisted that owners of the demolished properties were served notice.

The Permanent Secretary, Ministry of Physical and Urban Development, Chris Abode, in a statement, said the owner of the property at 13 Aideyan Street, had earlier been served notice on his property.

He added that the notice was served on June 6, 2021, with a reminder to the owner to remove or demolish the building after it allegedly failed to meet the necessary approvals.