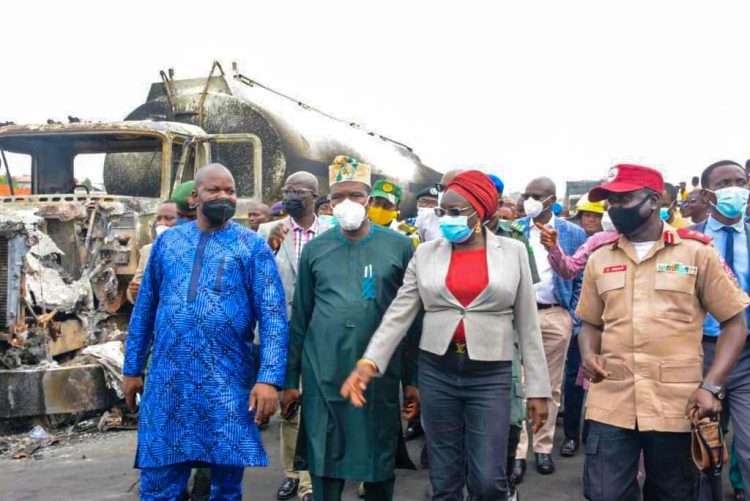 Engr. Noimot Salako-Oyedele with others at the scene of the incident

The Ogun State Government has extended condolence to the families of those who lost their lives in the fire incident that occurred in the early hours of Tuesday around Ogere axis, on Lagos/Ibadan expressway.

A fully loaded fuel tanker had collided with another truck during heavy traffic along the highway.

The Deputy Governor, Engr. Noimot Salako-Oyedele who led government’s delegation to the scene of the incident, commended officials of the fire service and road management agencies for responding promptly to the emergency, which had helped limit the tragic loss of lives.

Salako-Oyedele implored motorist to always obey traffic rules, promising the State government would do its best to resolve the gridlock speedily.

After taking the brief on the happening from the relevant agencies managing the situation, the deputy governor directed the Permanent Secretary, Ministry of Special Duties and Intergovernmental Affairs, Mr. Kehinde Onasanya to coordinate the agencies, towards ensuring quick evacuation of trucks to ease vehicular movement along the corridor.