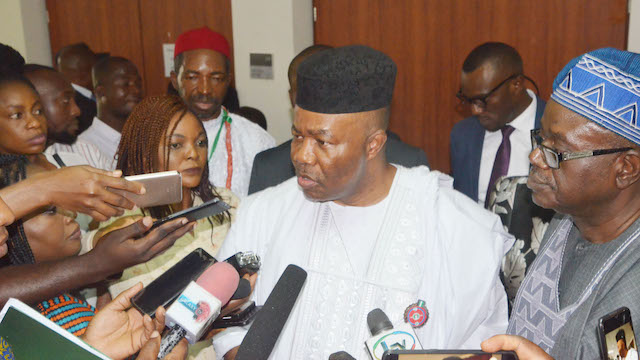 Godswill Akpabio, Minister of Niger Delta Affairs, said the final report of the forensic audit of Niger Delta Development Commission (NDDC) will be ready by the end of July.

He also said the National Assembly will soon get a list of the NDDC board members.

“In terms of the composition of the board of the NDDC, we have fast tracked the process and the National Assembly will soon get the list”, he said.

Akpabio, who fielded questions from State House correspondents on Tuesday at the Presidential Villa, Abuja, said the final report would be submitted to President Muhammadu Buhari for implementation.

The Federal Executive Council (FEC) had in February 2020 approved the appointment of a lead consultant for the forensic audit of Niger Delta Development Commission (NDDC).

The minister said that action had been expedited on the process of constitution of the board of NDDC.

“We have fast tracked the process of constituting the board; but we insist that the most important thing is not just the development of the Niger Delta region but how to reposition NDDC to ensure optimal performance as against the practice in the past.

“So, the forensic audit of NDDC is on course and it is progressing very well and I am happy with the progress made so far.

“And I am very certain that by end of July which is just a month and a few weeks away that the final result will be given to the president for implementation.

He said that he was hopeful that the new board would use the recommendations of forensic audit to work and reposition the commission.

The minister regretted that, in the past, the headquarters of the commission was not connected to the national grid for 10 years to 15 years.

“And we have noticed the fact that even the headquarters building that was started over 20 years to 24 years ago, nobody was interested.

“ I think they were pursuing projects that were probably beneficial to either the staff or the management and not necessarily things that benefited the region.’’

Akpabio said that the East-West road was another major area of concentration which the NDDC itself should have taken interest in.

He said that he worked on federal roads when he was the governor of Akwa Ibom State.

“So, I think, even NDDC should have intervened in East-West road to ensure its completion because of the economic importance of the road.

“Just three days ago, we had a mishap where one of the bridges had a problem; the approach to the bridge, it caused so much traffic jam in Port Harcourt for hours and we had to move in.

“To the glory of God, we have repaired the damaged section of the road and traffic is flowing and we working very hard to make sure that we complete that road come next year for the benefit of the Nigerians not just Niger Delta,’’ he said.

He said that his recent visit to the Niger-Delta region was not as result of pressure from any quarters but for the sake of peace in the region.

According to him, the region is very critical to the economy of the country.

The minister said that he had and interactive session with stakeholders in the region for purpose of the economy of Nigerian economy as the impact of any unrest in the region would affect be adverse.

He added that he had set the pace by his visit to the Niger Delta as his move was being emulated in dousing the agitations in the South-East.

“And I think the example I set is what is being emulated now in the South-East—that there is need for those of us in government to go back home and interact with people at the grassroots.

“And then, explain things to them; so that we can stop the restiveness that we are witnessing in many zones of the country.

“So, my going to creeks to meet the traditional rulers and ex-agitators was in the interest of not just the security of the region but the peace of the region.

“And by implication, to ensure that critical infrastructure that can affect the economy of the nation were not tampered with; I think it was a step in the right direction,’’ he said.