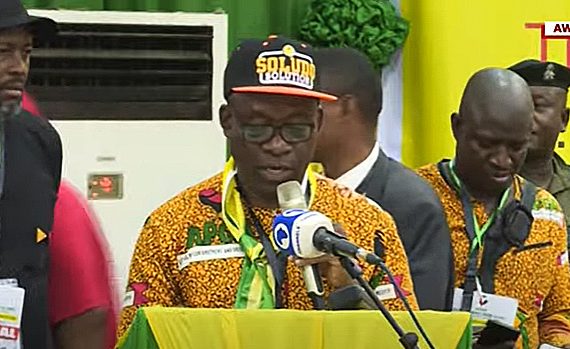 This came few hours after a faction of APGA in Anambra suspended him from the party for anti-party activities.

Soludo scored a total of 740 votes out of 792 valid votes cast by delegates.

Declaring the results of the exercise, Samson Olalere, the Returning Officer said Soludo fulfilled the provisions of Electoral Act and APGA guidelines.

He said a total of 812 delegates were registered out of which 795 accredited and 792 voted.

The returning officer issued the APGA candidate Certificate of Return after Gov. Willie Obiano, raised up Soludo’s hand as the duly elected candidate of the party in the forthcoming election.

In his remark, Obiano congratulated Soludo for his victory while calling on party faithful to continue to support the party.

In his acceptance speech, the former CBN governor said he welcomed the nomination of APGA to fly their banner in the forthcoming governorship election.

“I accept your nomination in the November 6 governorship election. I am proud that I came from Anambra. I offer nothing but statement of gratitude, thank you for the mandate to fly our flag. I assure INEC that APGA is a law-abiding party.

“I salute the other aspirants. I salute you. This is the time to unite. We won the primary by over 80 percent, but let us come together. The coming election is consequential for the state. It will determine our match for progression of retrogression,” he said.

Soludo commended previous governors of Anambra for transforming the state, but noted that Governor Willy Obiano had taken the state to the next level.

He said there is no state government in Nigeria with comparable revenue like Anambra State that is doing well than the present administration, saying there is no need to change a winning team.

“We need continuity, consolidation and transformation, we need to build on what is on ground. We will unveil our campaign manifesto in August. I am a poor boy whom God has raised to serve. I have been decorated with over 200 awards.

“I believe it is now time for me to serve my people. I have decided to give back to the people.

Opinion polls, he said, showed that members of other political parties said they would support him if he emerged APGA candidate, he said.

In a reaction, Chief Neville Uchendu, a chieftain of APGA said the outcome of APGA primary was a tip of the iceberg on what would happen during Nov.6 election.

“Soludo is greatly loved by Anambra people and they will massively vote for him during the election,” he said.

Delegates for the election had assembled at the popular Alex Ekwueme Square Awka, for accreditation before proceeding to Prof. Dora Akunyuli Women Development Centre.

There was heavy security presence at the two locations in Awka even as journalists were refused entry into the two places.