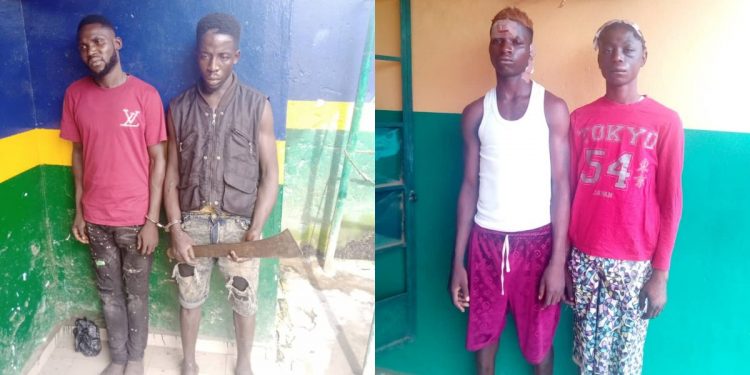 Four suspected deadly armed robbers have been arrested by the Lagos State Police Command in different parts of the state.

A statement issued by Police Public Relations Officer, PPRO, Muyiwa Adejobi said the robbers were arrested by the special squads set up by the Commissioner of Police, Hakeem Odumosu to tackle armed robbery, robbery in traffic and cultism.

He quoted Odumosu as saying that two of the robbers were arrested at Zone C1, Gberigbe, Imota, Ikorodu, Lagos State, on June 22, 2021,at about 1am.

“The policemen attached to Imota Division of the Command had responded to a distress call from residents of Zone C1, Gberigbe, Ikorodu, that some armed robbers invaded their community and attacked some residents before 2 of them were arrested, while others fled.

“The suspects include Abdulfatai Abiola, m, 21 and Quadri Adeniyi, m, 19, both of no fixed address from Mushin Olosa, Lagos. Items recovered from them include a cutlass, 43 inches plasma TV, One Itel Phone, One Hauwei Phone and assorted charms.

“They were arrested at Iyana Iba Area of Lagos State while robbing one Alli Ibrahim of Ara Junction, Egbeda, Lagos. The stolen items from Mr Alli Ibrahim were recovered from the suspected armed robbers, including One Vivo Phone, One Infinix Hot 9 Phone and one Bluetooth. The duo were caught in the act and have also made confessional statement to that effect,” Muyiwa said.

According to him, Odumosu, while reassuring Lagosians of consistency in the fight against crimes and social vices in Lagos, ordered that the suspects be transferred to the Command’s Special Squad for thorough investigation and possible prosecution.

He further directed that the fleeing members of the gangs be arrested by all means and be brought to book accordingly.

Odumosu, however, appealed to the general public to always intimate the Command of any act of lawlessness and criminality in any part of the state as all hands must be on deck to collectively police Lagos State.