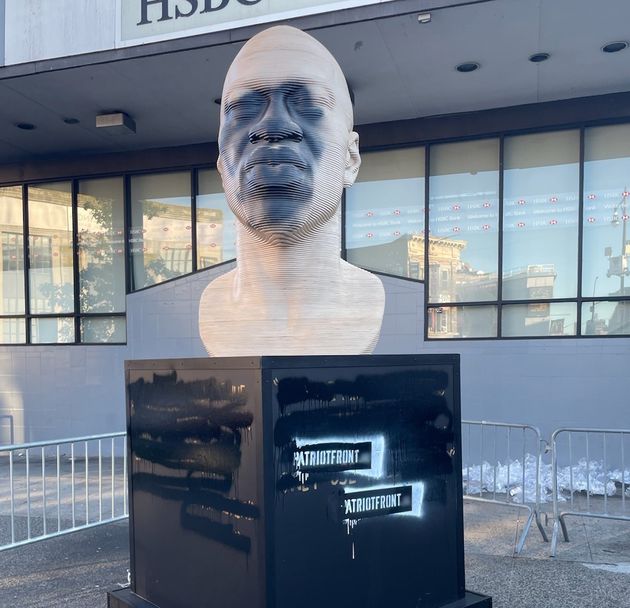 The statues of George Floyd, in Brooklyn and in Newark, have been defaced by vandals.

The statue which was unveiled on Juneteenth at 1545 Flatbush Avenue in Brooklyn was discovered vandalized around 7:20 a.m. Thursday.

This has led to growing outrage in Brooklyn and in Newark. However, police said an investigation has commenced.

The police have also released surveillance video of four men wanted in connection to the vandalism incident in Brooklyn.

They say the video captures them walking near the scene before and after the incident.

After news broke of the vandalism in Brooklyn, officials in Newark announced they were also investigating the defacing of the George Floyd statue at City Hall that occurred overnight.

In Brooklyn, George Floyd’s face and the statue’s pedestal were spray-painted black with the wording “PatriotsFront.Us” spray-painted in white — barely five days after it was unveiled.

Police say it happened in the middle of the night.

“I’m not gonna get emotional but to come up today, someone in the name of hate came through the night and defaced it. In the night, when we couldn’t see their face. They snuck in. It’s really, really devastating,” said statue producer Lindsay Eshelman. “They seem to be very aligned with the things that happened at the Capitol. They seem to be incredibly focused on patriotism, but in my eyes. This was not ‘patriotism’ this was terrorism.”

“It’s only been five days, and it’s very disheartening,” Nelson said. “And it’s disgusting and it’s sad and it’s cowardly. And they did it like a thief in the night. But you can’t stop us.