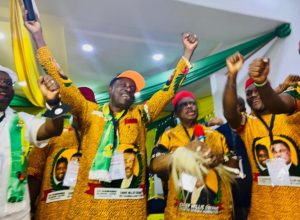 The Speaker, Anambra House of Assembly, Mr. Uche Okafor, has described the emergence of Prof. Chukwuma Soludo, as the flag bearer of the All Progressives Grand Alliance (APGA) for the Governorship election as most deserving.

Okafor, in a congratulatory message to the APGA candidate in Awka on Saturday, said that Soludo had outstanding qualities and marketable potential.

Soludo is an Economist and former governor of the Central Bank of Nigeria (CBN).

The former CBN governor emerged winner of the APGA primary election on Wednesday after securing 740 votes out of 795 valid votes cast to be the party’s flag bearer in the Anambra Governorship election scheduled for Nov. 6.

The Speaker, however, commended the party leadership, stakeholders, and members for ensuring a peaceful primary election.

Okafor, who expressed satisfaction with the outcome of the election, said that APGA, being a mass movement of progressives, would continue to retain the seat of the Anambra State government.

Okafor also called on APGA faithful in the state to intensify efforts in mobilizing support for the party to ensure victory in the forthcoming governorship election in the state.