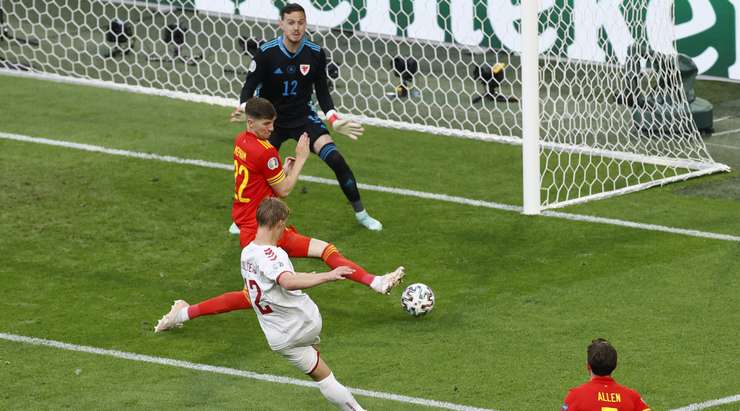 Denmark scored one of their goals

Denmark have crushed Wales 4-0 to reach Euro 2020 quarter-final on Saturday in Amsterdam.

It was a comprehensive victory for Denmark as they took control of the match from the beginning to the end.

Kasper Dolberg gave Denmark the lead on 27 minutes after he took a great first touch to control a killer pass on the edge of the box and curled the ball inside the right post in trademark fashion.

He gathered the ball off a rebound inside the box and fired home into the right side of the net.

Joakim Maehle made it 3-0 for Denmark on 88 minutes, as he received a well-taken defence-splitting low pass inside the box and scored. His great effort made its way into the right side of the goal.

Martin Braithwaite made it 4-0 on four minutes added time. He collected a pass and fired a low shot into the bottom left corner.

The referee initially disallowed the goal for offside but a check by VAR ruled out the offside and gave Denmark the goal.