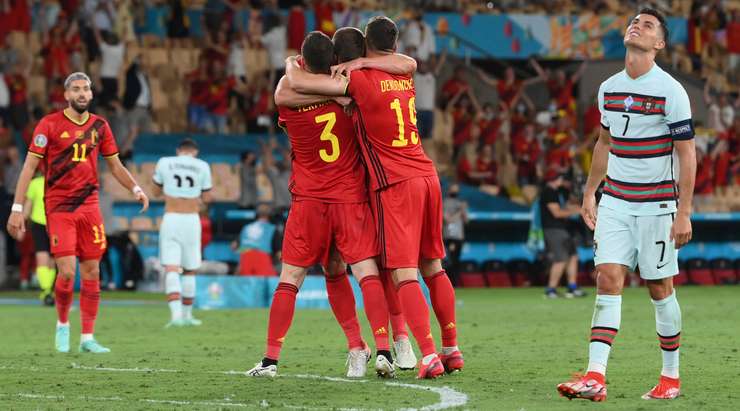 Ronaldo down and out as Belgium celebrate

Belgium have sent out defending champions, Portugal out of Euro 2020, with a lone goal victory on Sunday.

Portugal dominated the game with 24 goal attempts and five shots on goal, while Belgium scored with its only shot on goal and six goal attempts.

Thorgan Hazard got the only goal of the match for Belgium on 42 minutes.

He latched on to a superb pass and breaks through the defence before firing a shot from mid-range that goes past the goalkeeper inside the right post.

On 58 minutes, Diogo Jota had a chance to draw Portugal level.

He picked up an inch-perfect pass inside the box and fired the ball just over the crossbar.

On 83 minutes, Raphael Guerreiro fired a brilliant shot from the edge of the box, but the effort rattled the right post It could have been a superb goal for Portugal if it had entered.

On 88 minutes, Andre Silva had a great chance to equalise for Portugal inside the six-yard box, he shot to the middle of the goal, but Thibaut Courtois pulled off an exquisite save to deny him.