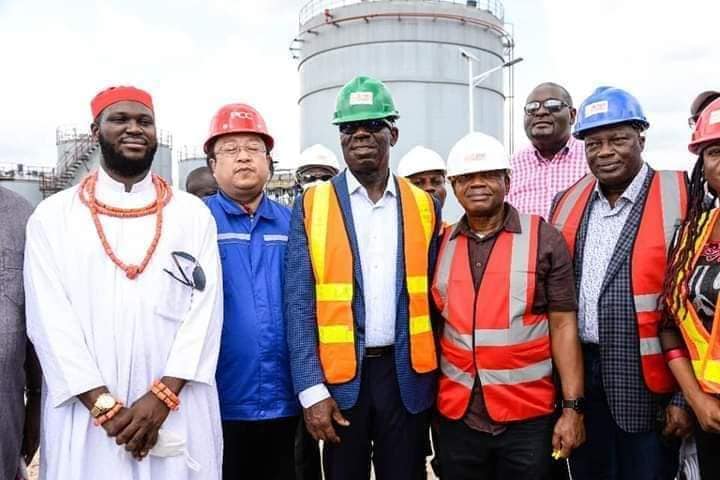 Obaseki at the Edo modular refinery

Godwin Obaseki, the governor of Edo State has said that the Edo modular refinery would begin operation in August.

He said this on Saturday after a tour of the refinery located at Ologbo, Ikpoba-Okha Local Government Area.

Edo Modular Refinery is being developed by Edo Refinery and Petrochemical Company Limited (ERPC) with support from the Edo State Government.

Obaseki was conducted round the facilities by the Managing Director in charge of the refinery, Mr. Tim Tian.

“They have done the pre-commissioning with the Department of Petroleum Resources (DPR). They have certified the refinery as ready for production.”

Obaseki expressed joy that the facility is ready despite the setback caused by the COVID-19 pandemic.

“Three years ago, the Memorandum of Understanding was signed. You can see that MoU works. So far, I am very impressed that the plant has moved in such a speed.

“Despite the disruption caused by the COVID-19 pandemic, the refinery is ready to receive crude oil, ready to process and to deliver refined products.”

“What we have left now is to finalise the crude oil sale contract, these facilities have to get a certain type of crude from the Escravos line and that is being finalised.

“I hope that before the end of August, we should start lifting products from this refinery,” he said.

Previously, the Edo governor has said that the modular refinery would process 5,500 barrels of crude oil per day.

The refinery is being constructed by the Edo Modular and Refinery Company Limited and AIPCC Energy.

To Governor Obaseki, the refinery is among the growing list of ongoing legacy projects through MoU with local and international private investors.

They include the already completed 55MW CCTEC Ossiomo Power Plant; the ongoing Benin Enterprise and Industrial Park; and the Benin River Port, for which works are ongoing.

The Traditional Ruler of Ologbo community, Owen Akenzua, expressed happiness about the facility.

“My people are excited that such project will go a long way in improving the socio-economic development for our community.

“The governor has this project dear to his heart, not only this project, the power plant is also situated in Ologbo.

“The OSSIOMO Power Plant is capable of generating power for the immediate environment and the state at large, we are glad that this project is sited here,” he said.

Mr Tim Tian, the Managing Director of the Ologbo modular refinery, commended the governor for his efforts towards actualising the project.

Tian, who agreed the outbreak of the COVID-19 pandemic had affected the project, however, said that the facility was ready for production.