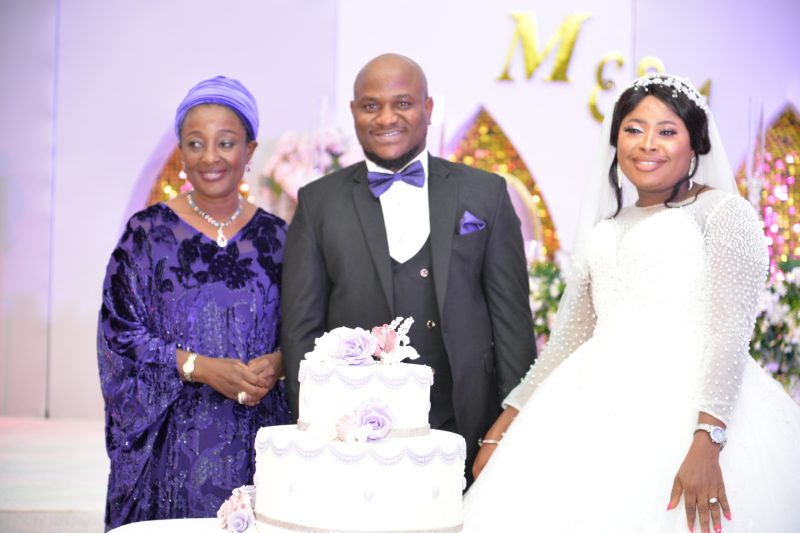 Wife of Edo State Governor, Mrs. Betsy Obaseki, organised a wedding reception for Mr. and Mrs. Abel Eromosele Ugiagbe, the couple whose marriage ceremony was disrupted by the absence of the Registrar of the Federal Marriage Registry, in the State capital.

The Edo First Lady explained that her decision to host the reception for the couple was borne out of the desire to ease the pain they went through, following the disappointment on their wedding day.

She added that the compassionate nature of Mr. Abel Eromosele Ugiagbe, who felt bad that the Registrar lost his job, drew her closer to the couple.

“After I confirmed the report as true, I called my friend and wife of the Minister for Interior, Mrs. Aregbesola who briefed her husband about the development. The Minister apologized to the couple.

“I really felt for the couple, especially the bride and decided to host them for a reception to make up for the disappointment on their wedding day.

“He told me that ITV came around and saw the situation and they just expressed how they felt but never knew the report will go viral and will lead to the registrar losing his job,” she said.

Chairman of the occasion and Chief of Staff to Edo State Governor, Hon. Osaigbovo Iyoha, congratulated the couple on the success of their wedding despite the disappointment they experienced over the failure of the Registrar of the Federal Marriage to show up for the marriage.

He urged guests at the reception to see every disappointment as a blessing.

According to him, “This is the first official state wedding reception held in this hall in Government House following the disappointment from the registrar who ought to join the couple on May 28th, 2021, but failed to show up and it became a topical issue after the story went viral on social media.”