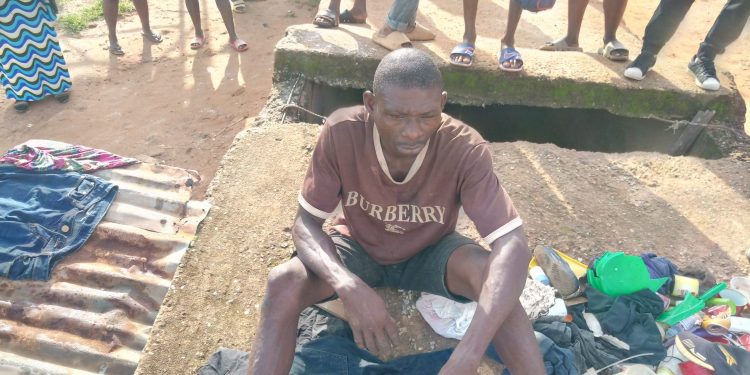 Raji, who claimed to be in his thirties from Ilesa, Osun State, was lurking in the large drain along the road that leads to the popular ‘Oko filling’ when one of the residents sighted him around 6:15am.

He allegedly hid himself in a deeper corner of the covered drainage channel. This prompted the resident to alert other members of the community who immediately mobilised and succeeded in smoking him out after over two hours of concerted effort.

When he was asked of his mission for hiding in the drain at the junction around which children usually mill, rather than offer explanation, he was just appealing for forgiveness.

When PM NEWS asked what he was doing inside the stinking culvert at such early hours of the morning, he pointed to some refuse around him as the objects he came to scavenge. He could also not give a definite address as his place of resident, saying he lived around Iyamu Junction.

Another resident who spoke with PM NEWS under the condition of anonymity said residents of the area became more vigilant after two recent incidents of tricycle stealing by suspected criminals hiding around the abnormally constructed drain.

He appealed to the Lagos State Ministry of Works to demolish the sky-high drainage channel that has submerged houses in the area and construct normal one.

The arrival of the Agbenaje Community Development Association (CDA) leaders, who had earlier gotten hint of the incident, calmed the crowd which was already growing rowdy. The team, led by its Chairman Olaitan Adeniyi, effectively took charge of the situation.

“We are not surprised at the incident given the prevailing situation in the country. But, we can assure criminals around that we have vibrant youths and executives who are up to the task. Agbenaje community will not be a convenient place for them to operate”, Adeniyi said.

At the time of filing this report, efforts were ongoing to hand the suspect over to the police.