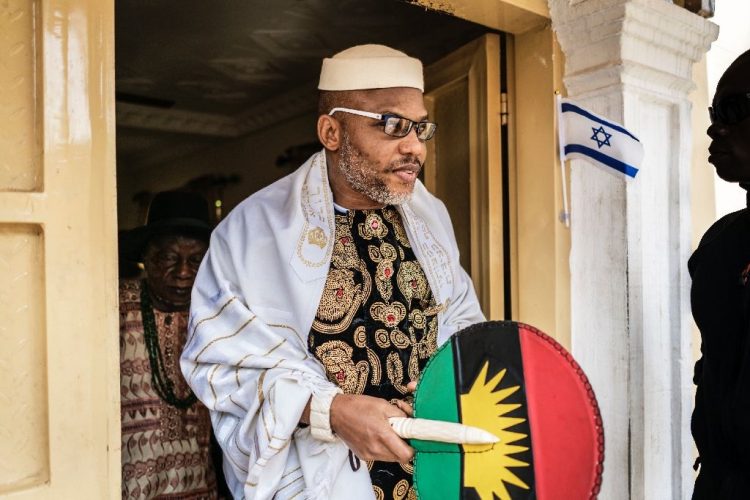 P.M. News can reveal that Nnamdi Kanu, leader of the Indigenous People of Biafra was arrested in Czech Republic and then brought to Nigeria to continue his trial.

Government sources told P.M. News that he was lured to the country to receive a donation of weapons to IPOB’s Eastern Security Network (ESN).

“He was lured there to come and take a large donation of arms”, P.M. News sources said.

Kanu is a UK citizen and he holds a UK passport. To go to Czech Republic, holders of UK passports do not require a visa.

And it takes less than two hours to make the journey to Prague, the capital.

The Czech Republic has been a major arms supplier to Nigeria.

Out of the $91.65m Czech’s exports to Nigeria in 2020, arms and weapons accounted for $32.69m, according to data from tradingeconomics.com.

In disclosing the dramatic arrest on Tuesday, Attorney-general and Justice Minister, Abubakar Malami said Kanu was arrested after some ‘recent steps” taken by the Nigerian government.

He did not mention Interpol, but said Kanu was intercepted through the collaborative efforts of “Nigerian intelligence and Security Services”.

“He has been brought back to Nigeria, in order to continue facing trial after disappearing, while on bail regarding 11 count charges against him”, he said.

Why Kanu fell for the Czech Republic trap was clear.

From his supposedly safe haven in England, he believed that a militant wing of IPOB was necessary to actualise his Biafra dream.

This explained the bloody clashes between ESN elements and the Nigerian security in recent times.

In a 26 June tweet, he seemed to have concretised why militancy was inevitable in the struggle.

“#IPOB remains the only constant obstacle on the path of the Fulani conquest of the rest of Nigeria”, he wrote.

“Now, the duty of Safeguarding Biafraland remains our sole focus & responsibility. This Is why #ESN was created to put an end to the unchecked atrocities against innocent Biafrans”, he added.

Self-acclaimed leader of the proscribed secessionist Indigenous People of Biafra (IPOB), Nnamdi Kanu, has been arrested through the collaborative efforts of Nigerian intelligence and security services.
He has been brought back to Nigeria in order to continue facing trial after disappearing while on bail regarding 11 count charge against him.
Recent steps taken by the Federal Government saw to the interception of the fugitive Kanu on Sunday the 27th day of June, 2021.
Nwannekaenyi Nnamdi Ngozichukwu Okwu-Kanu, born 25th day of September, 1967 at Afaraukwu, Abia State is a holder of Nigerian Passport No. A05136827 first issued 17th October 2013 at FESTAC, Lagos.
It is recalled that Kanu was arrested on 14th October, 2015 on 11 count charge bordering on terrorism, treasonable felony, managing an unlawful society, publication of defamatory matter, illegal possession of firearms and improper importation of goods, among others.
A judge at the Federal High Court, Abuja revoked Kanu’s bail that was granted him on health ground and issued a bench warrant for his arrest on the same date, over his failure to appear in court for hearing.
He has, upon jumping bail, been accused of engaging in subversive activities that include inciting violence through television, radio and online broadcasts against Nigeria and Nigerian State and institutions.
Kanu was also accused of instigating violence especially in the Southeastern Nigeria that resulted in the loss of lives and property of civilians, military, para military, police forces and destruction of civil institutions and symbols of authorities.

*Apology: The source of this story, a government official, grossly misled the editors. We apologise for the inaccurate report on the Czech Republic connection.