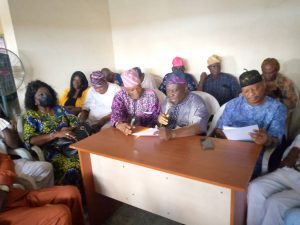 Lagos PDP chieftains at the news conference by the newly reinstated Chairman, Dr Dominic Agboola, on Monday in Lagos

Dr Dominic Agboola, the newly reinstated Peoples Democratic Party Chairman in Lagos State, on Monday called for unity of purpose ahead of 2023 and local government polls in the state.

Agboola, who was recently reinstated by a Lagos High Court, expressed his determination to stabilise the party during a news conference in Lagos.

Agboola, who promised to adhere to the party constitution and due process in running the party, said that members would be allowed to choose their leaders without violence and thuggery.

The chairman commended the long-suffering, dedicated and committed party members “despite the huge dark clouds that have hung over the party for the past twenty months.

“In rather bizarre circumstances, the peace and stability of our great party got rudely disturbed through avoidable wrongful actions and/or inactions which led to a protracted lawsuit, and which, by divine providence, came to an end some four days ago.

“In that period, our party has suffered severely under the sledgehammer of corruption unleashed on it by a sense of self-seeking, indecent, and unmitigated bravado.

“In those twenty months, indiscipline, total disregard of the party’s rules and constitution, among others, have disrupted the basis of our party’s promises to the people of Lagos State,” he said.

According to him, PDP is poised to reestablish the old and proper attitude where leaders, officers and representatives are elected at free and fair congresses and primaries, as prescribed by the extant provisions of the party’s constitution.

He called for a solid party structure and hard work to boost the fortune of the PDP in the state, especially in the forthcoming Lagos council polls.

“As the 2023 national elections stare the nation in the face, the PDP in Lagos State must work hard to contribute its fair quota to the pool of the winning streak that will be the portion of the party nationwide.

“To this end, the impending local government election in Lagos State provides an ample opportunity for the party to test-run its machinery towards 2023.

“The machinery includes the establishment of wards and polling booth structures in all the polling units throughout the state.

“It is a sure way to win many, if not all the chairmanship and councillorship positions available,” Agboola added.

According to him, party members who are aspiring for elective positions at PDP forthcoming congresses are directed to work to produce the councillor of their respective wards in the forthcoming council polls.

Agboola, who noted that PDP was determined to win as many councillorship and chairmanship seats as possible, assured candidates of logistics and other material support within the reach of the party.

He said that his leadership would ensure strict compliance with the ethos of good conduct and gentlemanly behaviour as enshrined in the party rule book.

Some of the chieftains of the party in attendance included, Prince Muiz Shodipe (the state secretary), Sen. Kofoworola Bucknor and Mr Taofik Gani, the State Publicity Secretary, among others.

The crisis within Lagos PDP is far from being over after the court judgement as an opposing group in the party vowed to appeal the judgement that reinstated Agboola.