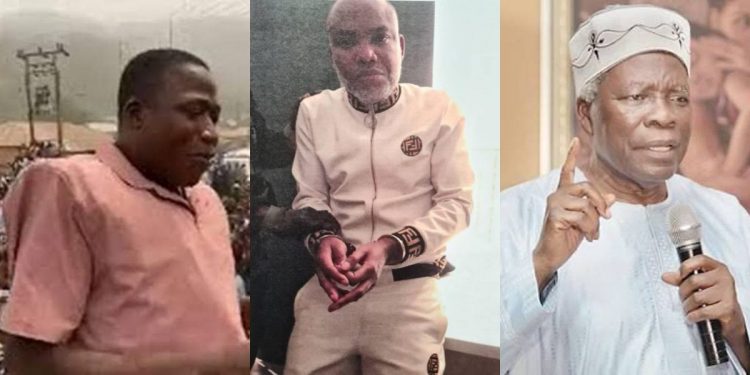 Leader of the Indigenous People of Biafra (IPOB), Nnamdi Kanu had looked invincible. For years, the long arm of the law could not catch up with him. Kanu was a growing threat to the existence of Nigeria as an entity, as he pursued secession of the Igbo from Nigeria aggressively and brutishly.

With millions of followers, Kanu’s words are power. At his command, the entire Southeast geo-political zone shakes, the governors are afraid of him. Whenever he ordered sit-at-home, everywhere remained quiet, no one dared go out.

Kanu has been on the wanted list of the Nigerian government having incited violence in the Eastern part of the country in serious arm struggle with the Nigerian State.

On October 2015, Kanu was arrested and charged by the Federal Government on an 11-count charge bordering on “terrorism, treasonable felony, managing an unlawful society, publication of defamatory matter, illegal possession of firearms and improper importation of goods, among others.

He was granted bail on April 2017 for medical reasons. He fled the country in September 2017 after an invasion of his home by the military in Afara-Ukwu, near Umuahia, Abia State. Since then he has been sighted in Israel and has continued to rally his supporters in Nigeria to employ violence in achieving secession.

In December 2020, Kanu announced the formation of the Eastern Security Network (ESN), a regional security force. Kanu later gave all the governors of southeast Nigeria 14 days to ban open-grazing, threatening to deploy the ESN to enforce a ban if the authorities did not do so.

The Nigerian government’s response to the formation of the ESN led to the Orlu Crisis, which started week-long military confrontation in which the ESN threw back an initial Nigerian Army offensive, prompting the deployment of reinforcements. Before another offensive was launched, Kanu ordered the ESN to withdraw to the bush, temporarily ending the confrontation.

The Nigerian army and air force renewed hostilities on February 18 by launching a military offensive against the ESN; the next day, IPOB declared that as of 18 February, a state of war had existed between Nigeria and Biafra.

With a very strong Twitter base, he issued words of command to his foot-soldiers and they obeyed him. With his Radio Biafra, Kanu controlled the machinery of the Southeast outside his base abroad where he fled. His growing threat was one of the reasons the Federal Government suspended the operation of Twitter in Nigeria.

In recent times Kanu has incited IPOB to unleash mayhem in the east, especially Imo where his followers attacked INEC offices, invade prison and set inmates free and set police stations ablaze. The same goes to other eastern states. His activities have led to growing insecurity in the east that used to be very peaceful.

At the height of his popularity, he was brought down like a common criminal; he was hunted down by the Nigerian government and bundled home to account for his numerous sins. He had jumped bail, but now, he is back to face the wrath of the law.

Kanu’s arrest came as a shock to many because they never expected it. He has been humbled; he was swimming in opulence but suddenly catapulted into detention.

According to Nigeria’s Attorney General and Minister of Justice, Abubakar Malami, Kanu, upon jumping bail has been accused of engaging in subversive activities that include inciting violence through television, radio and online broadcasts against Nigeria and Nigerian State and institutions.

He said Kanu was also accused of instigating violence, especially in the Southeastern Nigeria that resulted in the loss of lives and property of civilians, military, para-military, police forces and destruction of civil institutions and symbols of authorities.

Igboho is now a growing threat to the territorial integrity of Nigeria. From issuing ultimatum to Fulani herdsmen in Igangan, Ibarapa Local Government to vacate, Igboho has graduated to championing the cause for Yoruba’s breakaway from Nigeria. He has been holding series of campaigns in Southwest demanding for Yoruba Nation. He had forcefully led his followers to open the Seme Border and other atrocities. He is even gearing for a Lagos rally on July 4, 2021 to further drum support for his aspiration.

Igboho prides himself of being in possession of charms that will make no bullet penetrate him and to also collect people’s arms and ammunition at will. He has been emboldened by these illusions. But like Uzaiah in the Bible, Igboho is heading for destruction and that without remedy. Pundits are of the view that he should learn lessons from the capture of Kanu. Just like Kanu, Igboho has his children in safe custody in foreign land and yet instigating gullible followers to prosecute a battle he cannot win.

Banji Akintoye, the octogenarian emeritus professor of history is also another brain behind the move to secede from Nigeria. He has been busy drumming support for breakaway of the Yoruba people. He is championing a referendum currently to get the Yoruba people decide their fate and leave Nigeria.

These and others like Asari-Dokubo should know that they cannot fight the Nigerian State. Once the government decides to act, the sky is the limit. Igboho and others may soon be cut to size like Kanu.

Like Fredrick Nwabufo puts it, no man is too great for a nation to conquer. Igboho, Akintoye and other separatists are not too great for a nation to conquer. They should learn from the words of Buhari, “Many of those misbehaving today are too young to be aware of the destruction and loss of lives that occurred during the Nigerian Civil War. Those of us in the fields for 30 months, who went through the war, will treat them in the language they understand.”