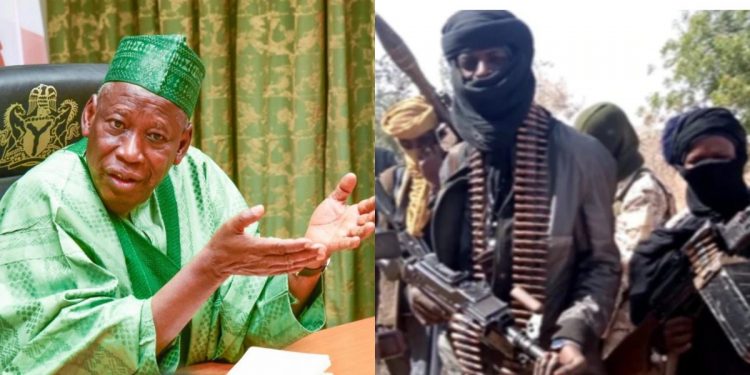 Bandits in Zamfara State have rained bullets on the convoy of Kano State Governor, Abdullah Ganduje and injured three policemen in the convoy.

The incident reported occurred on Tuesday while the convoy was coming from Zamfara State where Ganduje and other governors visited Guzau to receive Governor Bello Matawalle into the APC fold.

The convoy ran into a road block mounted by the bandits on the Zamfara, Katsina and Kano Road, around Shema and on seeing the convoy, the bandits opened fire on it.

Ganduje was not in the convoy when the attack happened, said Kano State Commissioner for Information, Malam Muhammad Garba, who confirmed the incident on Wednesday.

The Kano governor was said to have joined his counterpart from Jigawa, Muhammadu Abubakar Badaru, back to Kano, which was what saved his life.

The security operatives attached to Ganduje were said to have engaged the bandits in a gun-battle, repelling them before they could remove the barricade to drive through.

The three injured policemen were said to have been taken to the hospital for treatment.