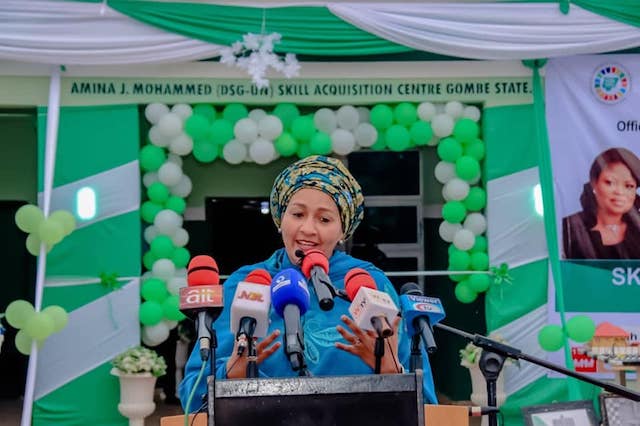 Amina Mohammed speaks at Skills centre in her name in Gombe

Amina Mohammed, Deputy Secretary General of the United Nations, has inaugurated a skills acquisition centre named after her in Gombe.

Mohammed who marks her 60th birthday, appreciated the gesture and called on women to utilize the centre to acquire new skills that would add value to their lives.

The centre was built by the national office of Sustainable Development Goals (SDGs) in partnership with Gombe State Government.

“The skill acquisition centre is for women; they do not have to wait for government jobs because it’s not forthcoming.

“Utilize the opportunity, learn skills and become permanent employers of labour in the future,’ she said.

She commended Gov. Inuwa Yahaya for working on projects started by his predecessors.

“Many leaders have come and set aside what had been done by their predecessors, but Governor Yahaya has built on what he has met.

“We appreciate him; he does everything with sense of pride and belonging and focus ,” she said.

Mohammed thanked the SDGs office for constructing a befitting skills acquisition centre in Gombe and bridging gaps in the execution of the programme.

Adejoke Orelope Adefulire, Senior Special Assistant to the President on SDGs, said the inauguration of the Amina J Mohammed Skills Acquisition Centre was to commemorate her 60th birthday .

She commended the governor for his commitment to achieving SDGs 2030 agenda in Gombe state.

Adefulire said the centre would offer 14 different professional training for young men and women in order to change their lives.

“We celebrate you, we are proud of you, you are a real ambassador.

“This building we are inaugurating today was as a result of your own effort, understanding and the wider relationship you have with the wide world.

“Only God knows where it would end, your contribution and service to humanity has no bound and would be here with us till eternity,” he said.

Yahaya said his administration was focused on enhancing human capital, to encourage youth and women by providing them with necessary skills to be self-reliant.

The centre is equipped with sewing machines, computers, editing suit for photography among other facilities.